A Kiosco SOLAR, or solar kiosk, is one of several solar powered mobile food carts in operation in northern Argentina. The project to introduce the food carts is sponsored by Fundación EcoAndina. During the celebrations of Carnival of Puna, which spans almost all of February, the intrepid promoters of the sun's energy walked a few new solar kiosks through the streets in Tilcara, Humahuaca, La Quiaca, Purmamarca and Uquía, tourist sites the northern province of Jujuy.

Each kiosk consists of a wheeled trolley, waterproof roof, and a parabolic solar cooker. "People are incredulous and astonished when the cart is in operation," says Marta Rojas, responsible for opening a kiosk this month in Tilcara, the ancient town that is the epicenter of the festivities. Since the late eighties, Fundación EcoAndina has worked in the development of various devices to harness sunlight in this arid region with scarce rainfall and vegetation, and wide temperature changes between daytime and nighttime. EcoAndina Foundation has had support from Germany, handled through the embassy in Argentina. Germany is a pioneer in the promotion of renewable energy and environmental stewardship. The policy also included development cooperation with ecological criteria requirements.

Rojas, a teacher, took a course in solar cooking and decided that the cart would be a success at the EcoAndina Carnival. "It is not the same as having it on display," he says.

The Solar kiosk is an idea that has been brewing for years, in order to provide a cleaner, greener alternative to those who work in the sale of street food. This type of food cart is deeply rooted in these cultures, where people (mostly women) armed with what items they have on hand and as best they can, create food stands that are flimsy, uncomfortable and dangerous. Often cooking over a gas cylinder or a bed of hot coals.

Important aspects of the project have been to provide safer food preparation, as well as to match the menu with the local cuisine. The parabolic solar cooker used at the kiosk has worked well to prepare traditional cooking recipes such as tenderloin, burgers, hot dogs, roasted corn, tortilla-like bread, fried pies, donuts, etc.

The kiosk consists of two main parts: The parabolic solar cooker concentrates and focuses sunlight onto the bottom of black cooking pots, quickly creating high heat. The other part is like a small workshop that allows preparing the food for cooking (this section includes a table, an exhibition area, a storage area for dishes, food and seasoning). Accessory features include a canvas umbrella, wheels and handles for transport, to either walk or pull the kiosk with a bicycle. It also has space for locating a gas cylinder for the days with no sun or for cooking in the evening. At the end of the business day, the vendor folds up the kiosk and can easily move it for storage.

The first units of Solar kiosk, designed by Virginia Bauso, are operating in the city of Jujuy, Argentina, thanks to the involvement of WISIONS, an organization that is providing support for the continuation of the project. 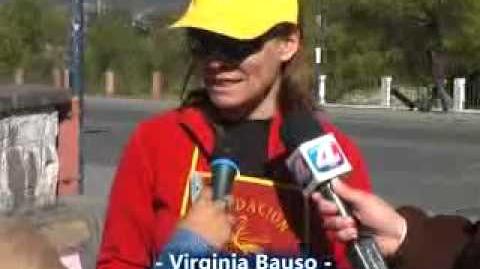