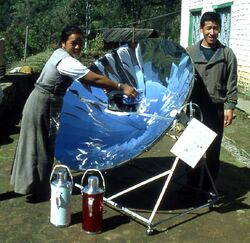 The tourists on the Mount Everest road are passing Bhandar when they are trekking from Jiri on the road to the Sagarmatha National Park in Nepal. For the correct presentation of the village it has to be noted that Bhandar is only one part of the village area which includes totally nine small villages with the names Thapra, Dokharpa, Bhandar, Deuralli, Sertughon, Pindole, Banti, Panga and Rosi with totally about 5000 inhabitants.

They belong all to the village area which has the same name as the village number three. As a tourist you are maybe not so interested in knowing this. The flowering and sweet-scented forests with big Rhododendron trees which have been in this area before might be of more interest to hear about from the people who still can remember them. Until today you can see some of these trees during your trekking and you can imagine how this area was looking before when all the trees were not cut down to give energy for the people who are living there now. Even though the energy consumption in Sweden is about twenty and in USA twenty-eight times higher per capita than in Nepal, we do not have to use this kind of wood energy, but the village people had no alternative before. Like the honey hunters of Nepal are working hard for getting the honey comb from the biggest bees we know in the world, they have to climb up on the mountains for getting the wood needed for cooking. From the people in Bhandar I got the information that the need for boiling 50 liter water is 6 kg wood or 1,5 liter kerosene. That will cost about 45 NRs for kerosene or 20 NRs for the wood (0.12 SEK = 1 NRs). I was thinking about the consequences when 5000 people are drinking tee or are cooking food each day. 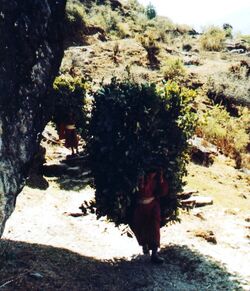 In Germany I found a paper with a solar cooker named SK14, designed by Dr. Dieter Seifert, Germany. Our guide Mr. Temba Lama helped us to produce and install the first one 1996 without knowing that the Center for Rual Technology (CRT) in Tripureswar, Kathmandu, could produce this kind of solar cookers since 1995. During our visit in Bhandar we got the knowledge how important it is to introduce this kind of equipment. The village people have to be aware of how the sun cookers can be used efficiently and in a safety manner. Each user has to be informed about the risks of having the sunlight concentrated in a focus and creating more than 600W in the middle of a parabolic shaped aluminium mirror. The position of the parabolic mirror can be changed in a support to catch the sun light. Each cooker can also easily be moved by four wheels. Except water we have seen people cooking rice, beans and chayote (Cucurbitaceae).

The promotion from the first introduction is important to show that smart people are using a sun cooker even if they are able to buy or carry their own wood or kerosene.

The aim for the projects (COG 2152 and NOG 468) was to produce more solar cookers (SK14) in Katmandu and to install them successfully in Bhandar, Nepal. Each solar cooker is saving health, labor, nature and carbon dioxide. Maybe we can save and recover the last forest with big rhododendron trees in this area of Nepal. It is easy to take action if people can see and take part of the problems and benefits. My acknowledgement for the latest project, NOG 468, is going to the persons at our Rotary District 2370 who took action for paying in advance the money which was granted by The Rotary Foundation in November 2002. By doing this I could start the project in March 2003 without any serious delay in spite of the fact that the monsoon period was beginning during May and in spite of the political situation in Nepal. The project took focus on finalizing the project as quickly and successfully as possible and provide the village people with 80 more solar cookers. 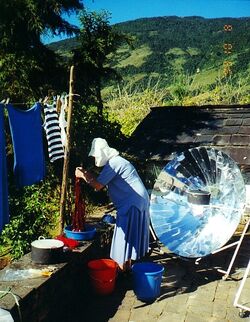 My acknowledgement is going to the Sherpa guide Mr. Temba Lama who managed all work in Nepal for both projects. My wife Anna, who is an Inner Wheel member and made many speeches about the solar cookers, gave me a lot of other help I needed to fulfill some of my ideas. The first coloured photos from the NOG-project were sent to me by courier post in July 2003. These and later pictures are showing how the solar cookers were produced, transported and installed.

I know that at the end of year 2003 totally 122 solar cookers were used in the village Bamti-Bhandar. My home Club Gnesta-Daga Rotary Cub and the Rotary District 2370 took part on the project work by getting information about the projects.

Thanks to these Grants and the donations from the Government of Nepal the village has the largest number of SK-14 units being used for the household purpose in Nepal. The CRT in Katmandu was helping us to get the financial help from the Government of Nepal. Both projects are now closed. Hopefully many tourists will came back to Nepal and will stay some day in the solar village to see and study the parabolic solar cookers.

After some years I propose that the projects could be followed-up to see how the solar cookers in Bhandar are used. This knowledge could be used for similar projects as well as for the image about the work already been done.