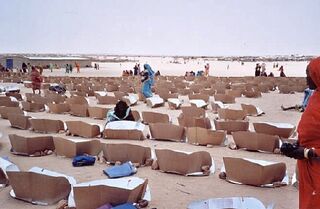 The KoZon Foundation (Stichting KoZon) is a Dutch NGO that is working introducing solar cooking in the Sahel: Chad, Burkina Faso, Mali and Niger. In Holland the foundation called KoZon is a shortcut from the Dutch: “Koken met de Zon als warmtebron” meaning: “cooking with the energy of the sun”. We have a board of 5 persons and a couple of active advisors, we all are volunteers.

As the CooKit is the cheapest solar cooker in Africa at the moment we think that it is the best way to teach women that solar cooking is possible. It is true that it is too small for the way food is cooked for the extended Sahelian families. But in combination with an improved stove and a large haybasket, large enough for the big pots, the CooKit is useful for many dishes which can be prepared when the sun is shining.

In the refugee camps in Chad, where our advisor Derk Rijks is the project manager, small groups of about 5 to 6 people live in the tents and there the women find the CooKit a wonderful tool as it diminishes substantially their need for firewood and as well it does the cooking nicely. 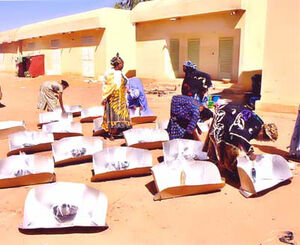