See also: Global Calendar of Events and past events in Madagascar 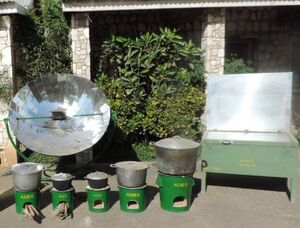 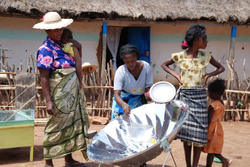 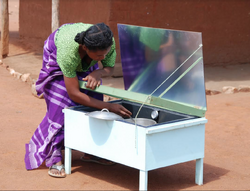 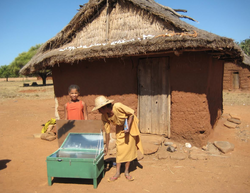 Madagascar, with its unique biological diversity, has attracted the attention of environmentalists from around the world to come to its rescue. It is somewhat surprising then to learn that historically, little has been done to curtail the use of fuelwood as the major cooking energy for the population. Around one-fifth of the island's land has forest cover, which has diminished at nearly 1% annually (FAO, 2003). A representative of the country, speaking at the Varese meeting in 1999, spoke of solar experimentation in the 1970s, revived in the 90s as deforestation worsened, but with little progress in mass implementation. The initial introduction was principally with parabolics, but later the solar box oven was introduced and enthusiastically endorsed. The report called on governments, non-governmental organizations, and businesses to attempt to establish a strong national program, urging that international research and development be done cooperatively and shared widely with smaller nations.

One program operating in Madagascar was run by the medical arm (SALFA) of the Malagasy Lutheran Church. SALFA has operated 25 hospitals throughout the country. Dr. Stanley Quanback and his wife, medical missionaries in the country, initiated the project and helped to develop collaboration with another medical organization, Pathologists Overseas. Teaching materials and consultation were provided to the volunteers by California volunteer, Alice Hoenecke, sociologist Agnes Rasamimampianina , and nutritionist Sosanna Suzanne, the latter two employees of SALFA and citizens of the country.

The group began by training women in one village in a semiarid region of the country. The trainees were hospital staff members and members of a churchwomen's organization. As stated above, fuelwood was becoming very scarce and expensive. Miss Sosanna directed the project, supervising 15 trainers who went on to work in 11 villages. Primary health centers were usually the site for training in the use of solar cookers. They estimated, as of 2003, that there were 1,000 users and others begging to have solar cookers made available to them.Relief for Madagascar Cooks

Another project in Madagascar was initiated by l'Association pour le Développement de l'Energie Solaire (ADES), an NGO and a non-profit organization that has produced solar cookers in Madagascar and supports the use of renewable energy sources. It started in Tuléar in the south of Madagascar in 2001. Local production by local people with local material has been part of the ADES philosophy.

From Association pour le Développement de l'Energie Solaire: For centuries the population of Madagascar has been cooking their food with charcoal, which requires vast amounts of firewood in its production. About 90% of the original forest in Madagascar has been destroyed. It is not any more a green island but becomes more and more a red one. Madagascar has, especially in the south and southwest regions of the country, close to ideal conditions for the use of solar energy. The solar cookers and efficient stoves are an important contribution towards halting the deforestation process. Besides environmental reasons, there are also economical and practical reasons to favor the solar cooker. Families spend less money on wood and charcoal, and cooking with the solar cooker saves having to cook over smoky fires and avoid the associated respiratory disease.

The entities listed below are either based in Madagascar, or have established solar cooking projects there: