Making people aware of the energy crisis and the environmental degradation facing the world today. 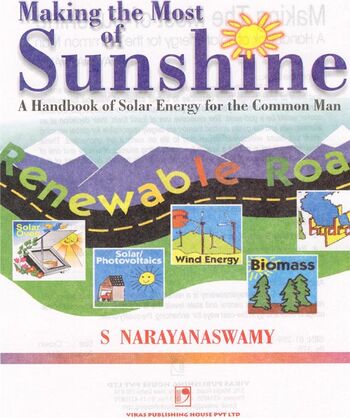 The potential of various forms of renewable energy - the proved technologies such as wind energy, photovoltaics, solar thermal, biomass, geothermal, solar pond, ocean thermal, wind and tidal energy and hydrogen energy (fuel cells) and the newer technologies being experimented with such as nanotechnology, space solar power systems, thermophotovoltaic devices, nuclear fusion and artificial photosynthesis. The astonishing strides that have been made in the field of renewable energy in many parts of the world.

How low grade thermal energy - which refers to the simple ways of using sunshine to cook food, heat water, dry vegetables and fruits, to desalinate and pasteurise water - is of great relevance to India which is a poor country but awash with sunshine.

How this will liberate the women of India, both the urban woman who can save in LPG and kerosene and find more time to attend to other chores and the rural woman who now has to trudge for miles for scraps of firewood and spend their lives in smoke filled kitchens.

How every household can be involved in the renewable energy movement by making use of low grade thermal energy for a variety of purposes at verylittle cost unlike other forms of renewable energy which are costly and at any rate out of reach of the common man.

The great neglect of this area in India and how this cries out for attention. The great value of the aforesaid solar energy applications as an educational tool for boys and girls.

The book is authored by S. Narayanaswamy who was a member of the Indian Administrative Service and retired as chief secretary of the government of Kerala. He and his wife have personally used a solar cooker for ten years and the book is based on their experience arising from such use.

The book runs to 68,000 words. The following are the chapter headings:

Most people do not know that there was a great interest in U.S.A. in solar energy even at the turn of the last century. The discovery of the technology for oil drilling and the siting of extensive oil deposits in several parts of the world put paid to such burgeoning efforts and heralded the era of petroleum and gas. Now solar energy and other renewable forms of energy have again emerged as a potential substitute because of the rapid exhaustion of the fossil fuel reserves and the enormous pollution caused by the burning of such fuels.

There was a spurt of interest in solar energy after the oil crisis of 1973. After the oil prices came down interest in non-conventional energies slackened. Again in the last few years following evidence of global warming caused by emission of greenhouse gases and the constant pressure of scientists and environmentalists there is a renewed interest in renewable energy world over. Countries like U.S.A., Germany, Japan, Israel and Denmark are now world leaders in many areas. The money poured into R&D efforts in space exploration has, over the years, reduced the cost of photovoltaic cells and fuel cells and made them useful for earth applications.

In India also there was a spurt in harnessing renewable energy technologies in the eighties and early nineties. But the direction it has followed has not been entirely welcome in some ways. Unlike western countries India is a poor country and bulk of the people use firewood or kerosene in the kitchen. India is also abundantly endowed with sunshine. Harnessing solar thermal energy requires only low cost technology.

It is cheap and and cost effective whereas other forms of non- conventional energy require costly investment. The solar cooker is the star performer in the category of low grade thermal energy utilisation. The central and state governments in India began a grand programme of popularising solar cookers some 10-15 years ago. The cost of the solar cooker was subsidised by the central government. But the interest was short-lived. The subsidy was withdrawn by the central government (a couple of state governments are however providing the subsidy on their own initiative now) in 1994 and the whole programme has fallen by the way side. The irony is that subsidy on the solar cooker which is the only renewable energy device relevant to the common man was withdrawn in great haste while most other renewable energy products, removed from the common man, and even fossil fuel products like diesel, kerosene and LPG continue to be heavily subsidised. products like Solar cookers are made only by a handful of people mostly in north India.

The solar cooker is now a rare commodity. It is a very simple device which can be made in a garage with a few tools. Yet there is no drive to attract entrepreneurs to make and to popularise the cooker. The aim should be flood the country with cheap, light weight and durable solar cookers.

On the other hand, other forms of energy such as wind energy and photovoltaics are being popularised at great cost. While it is welcome to make a beginning in all areas of renewable energy the emphasis should be on the low grade solar thermal energy having regard to conditions prevailing in India. It is this which is sadly lacking in India today. The book highlights this failure to popularise the right technology in India. The book provides plans for making low cost solar cookers.

The solar cooker can be easily made at home with materials like cardboard and aluminium foil. The making of the solar cooker can and should be demonstrated in schools and class lessons on solar energy prepared. Quizzes and competitions can be held on solar cooking. Science clubs in schools can take interest in fabricating various types of cookers.

In various parts of the world such as South Africa, Kenya, Mozambique, Tanzania, Zambia, Nepal and other south American countries various types of solar cookers are being experimented with. There are over 60 designs of solar cookers made by enthusiasts world over but only a few designs have promise of practical utility. The simple box cooker is the most durable and cheap design available. But with a little effort other cheap, light weight and sturdy designs can be made. Such cookers have been made in South Africa. But India has no time for such projects of practical value and the planners and experts in government are distracted by costly projects in other areas.

IREDA, the Indian government agency for Renewable Energy, spends Rs 2000 million every year for non-conventional energy - hardly any part of this goes into the solar cooker.

In obscure corners of India enterprising individuals and groups of people are working silently and without much support or recognition in the area of low thermal solar energy - such as the St.Xavier's school in Kalol, Gujarat which is using solar energy to heat water and cook food. If this can be done in Kalol this could very well be done in all schools where we have the noon feeding programme. One entrepreneur has made a solar dryer for drying marigold flowers which is claimed to be the largest in Asia. In other countries solar drying is used to dry lumber, coffee berries and tulips.

Solar energy is used to make ice for a fishing village in Mexico. An entrepreneur in India has developed cooling devices using solar thermal energy. But they have not been commercialised for lack of encouragement. An entrepreneur who developed a community solar cooker had to close shop for lack of demand. Such examples abound. There is no time to waste for harnessing the energy of the sun, yet there is very little government support forthcoming.

The Brahmakumari organisation in Mt. Abu is running the world's biggest solar kitchen. But people in India do not know about its existence. The Changi Airport in Singapore uses solar energy in its vast flight kitchen.

The book provides a window into the world of non conventional energy and its great relevance for India in the area of low grade solar thermal energy.

The book has every thing there is to know about renewable energy. It is up-to-date on facts. It has a lot of interesting trivia which makes the book interesting reading.

Retrieved from "https://solarcooking.fandom.com/wiki/Making_the_Most_of_Sunshine?oldid=99251"
Community content is available under CC-BY-SA unless otherwise noted.