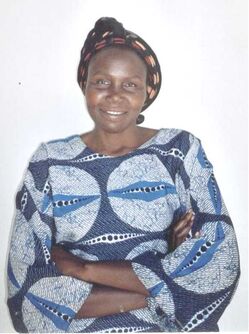 During the second world war Gerrit-Jan van Heuven Goedhart worked underground against the Nazis and had to flee in 1944 in barren circumstances through Belgium, France, over the Pyrenees, across Spain and finally arived in the UK. Some years after the war he became the first High Commissioner for Refugees of the United Nations, UNHCR. Originally his main task was to offer refugees legal protection. But he changed this, saying: "Refugees can't live from laws, what they need is bread, housing and work". In 1954 he won the Nobel Prize for Peace.

The winner of the award will be invited to the Netherlands for the official presentation of the award, during the week around World Refugee Day 2008. Besides the honour, the award involves € 50,000 (≈ US$ 80.000) to be spent on a refugee project chosen by the winner in consultation with the Dutch Refugee Foundation (SV).

Three candidates were nominated of which one was Marie-Rose Neloum, proposed by KoZon. She was choosen to our great delight. The following document was written to send to the jury for her nomination:

According to Derk Rijks (founder and coordinator of the project to introduce the CooKit in the Iridimi Refugee Camp in north-eastern Chad) without Marie-Rose Neloum this project would never have become an intensely desired and totally accepted success. She has a most extraordinary way of making women refugees enthusiastic about using solar energy and participating in making it work.

Criteria for selecting candidates for the van Heuven Goedhart award:

In the nearby Touloum Refugee Camp, the first phase of a project was launched in June 2007. The workshop in Touloum, and the further activities, are financed by the Jewish World Watch. The auxiliary trainers and craftswomen continue working and about half of the women have received training and cookers. Like in Iridimi camp about 1000 CooKits are made every month by 21 craftswomen, taking turns at the work site. Here again Marie-Rose is considered to be the leading actor of the project with people listening attentively to her proposals and comments.

At the moment the security situation in Chad is not good. A French humanitarian worker, member of the Save the Children organisation, was killed on the way to Farchana, where there is another refugee camp . From Iriba, the village near Iridimi and Touloum, where Marie-Rose lives and where Derk Rijks is at the moment, where the humanitarian workers have to spend the nights, it is at the moment impossible to go to the camps, too dangerous. Let us hope that the situation will soon improve again, it are the refugees who suffer most of this situation.