See also: Global Calendar of Events and past events in Mexico

Mexico has a rich solar cooking history, with several projects successfully implemnted since the early 2000's. Below is a summary of some of these programs.

Girl Scout leader Barby Pulliam conducted training programs for Girl Scout leaders and other representatives of NGOs in a number of cities and towns. Rotarian Wilfred Pimentel has also conducted a number of pilot programs in various cities. In some of those places, Rotary and Girl Scouts joined forces. A number of missions and other religious groups have promoted solar cookers in various parts of the country. One example is the Mission Mazahua, in Atlacomulco, which produced around 600 cookers. Several university faculty members have conducted research on cooking devices as well.

A large project originated in an unusual venue, a nature conservancy area, the Sierra Gorda Nature Reserve. In the spring of 2003, Louise Meyer of Solar Household Energy, Inc. (SHE, Inc.) conducted a training program to test user acceptance of a then new solar cooker called the HotPot. The device uses a modified CooKit design, initially of a plastic material then mental, as opposed to the cardboard of the CooKit. A black pot is enclosed within a tempered glass "greenhouse" instead of the plastic bag used in the original CooKit.

Within the confines of nature conservancies in Mexico, as elsewhere, trees cannot be cut down for use as fuelwood. Households living within the area thus must find other sources of energy for cooking. Therefore, the managing group of the Sierra Gorda site, the Grupo Ecológico Sierra Gorda, was delighted to explore the potential of solar cooking. The town of Purisima and a village, Mavi, were selected as the site for the initial training program. The Director of the Mexican Fund for the Conservation of Nature, Lorenzo Rosenzweig, partnered with SHE, Inc. to plan and implement this project.

Ms. Meyer traveled to Mexico, and conducted training for Sierra Gorda women, who were given HotPots and trained in their use over a two-day period. After the training, Ms. Meyer visited the women in their homes as follow-up for days of further training and coaching. The women were all interested in what others were cooking, and eventually a throng of cooks accompanied Ms. Meyer on most visits, enhancing the group learning substantially. Two women from the group were chosen for additional training in "how to teach others". The new trainers were again visited and coached in the art of training.

This pilot project, growing into a large-scale follow-up in other areas of Mexico, was among the winners of the 2003 Development Marketplace competition, an annual event held by the World Bank.

Sun Ovens International reports promoting both Sun Ovens and Scheffler-type parabolics in Cuernavaca and Mexico City. The parabolic portion of this work, conducted by the Grupo Scheffler de México installs large commercial and institutional cooking and water heating. The first institutional solar kitchen of Mexico (6 Schefflers reflectors of 10m2) was built in the Hidalgo State by Gregor Schäpers.

Mexico is the most populous Spanish-speaking country with over 100 million inhabitants. One-quarter of the population lives in Mexico City, the world’s largest city. Rapid population growth and industrialization in Mexico over the last few decades have put an enormous strain on the environment, economy and on individual health.

Less than 10% of Mexico’s native tropical rainforests remain today. These rainforests are limited to southeastern Mexico and are most threatened by subsistence activities—especially fuel wood collection. Fuel wood supplies 69% of the energy consumption in rural areas, particularly for cooking. As the supply of wood decreases it negatively impacts the lives of the people who depend on it.

For instance, women and girls are responsible for procuring fuel wood and they must travel farther from home as wood becomes more scarce. This task demands many hours and minimizes opportunities to attend school and participate in income-generating activities. In other areas, it is no longer feasible to gather wood. Families in these areas can spend 15% to 37% of their income on wood and/or gas.

In addition to the negative environmental and economic impact of fuel wood dependence, women and children suffer from health problems caused by cooking inside small, enclosed kitchens that often lack windows or other ventilation. They inhale toxic smoke for many hours each day, which can lead to pneumonia and respiratory infections, the biggest killers of children under five years of age.

Below are comments made by Kathy Dahl-Bredine on November 17, 2015 regarding the extent to which Mixtec families near Oaxaca, Mexico, who apparently have an ample supply of firewood to collect, continue to use their solar cookers:

After having done many solar workshops, I've always wanted to know the extent to which families are really continuing to use it. And after checking around a good deal, it seems to me that the technology is not really taking hold enough to change overall cooking habits. The participants are always very excited about the technique during the workshops, and I give them "homework" tasks afterward, which include teaching others to solar cook, et al. But in general they do not seem to be continuing it long term, and I've tried to analyze the reasons:

Besides the various types of simple solar cookers that I make with groups: Cookit, Windshield Shade Solar Cooker model, and others, my husband, Phil, and the teenagers he has trained in carpentry, make the Ulog box cookers. We're searching for a way to make a good reflector for that model, also a better version of the larger, family--size one. I keep thinking we need to find a way to make something as efficient as the Sun Oven. My son gave me one, and I use it nearly all the time. None of the ones we've ever made can measure up to that efficiency. And here in these mountains, known as "país de las nubes" (land of clouds), it is often at least partially cloudy, so a very efficient cooker would encourage folks to use it more. We need to find a way to make good extra reflectors. As models to use with the local people, we are committed to using only cookers that we can make locally, so as to be sustainable. 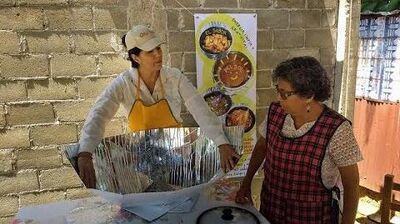 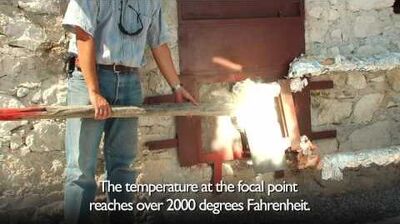 The entities listed below are either based in Mexico, or have established solar cooking projects there: