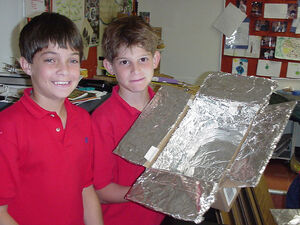 Students at Miami Country Day School in Miami, Florida, learn about solar cooking at a very young age -- four years old, to be exact. That is the age when the youngest students begin to explore the possibilities that abound when the sun's energy is exploited for cooking and water pasteurization. "Granted," instructor Rowena Gerber says, "the four year old will most likely hand you his super-melted crayon biscuit he made in his 'sun trap', but ... that same child will be designing his own unique solar cooker by the tender age of eight."

The innovative Rowena Gerber, director of The Abess Center for Environmental Studies at Miami Country Day School, leads students ages 4-12 through a project-based curriculum that encourages critical thinking and questioning and allows children to explore a fascinating range of subject matter in a hands-on manner. Students assume the roles of scientists, journalists, illustrators, poets, teachers, cooks and young socially conscious entrepreneurs, among other things.

For years Ms. Gerber's students have traveled to New York for the annual YouthCaN conference to present solar cooking workshops to over 1000 students exploring environmental issues and solutions. In preparation for the workshops, her students research the history of solar cooking, study the environmental and social implications of cooking with traditional fuel sources, write poems and songs about solar energy, and design solar cookers. In addition, the students recently presented solar cooking workshops to children from over 100 countries at the International Children's Conference on the Environment held in Canada. 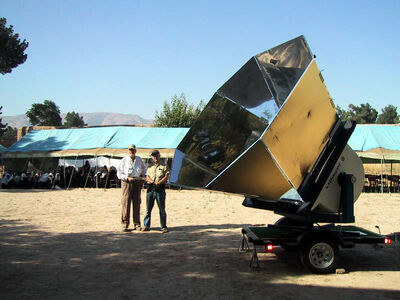 Miami Country Day School students are active in "real world" solar cooking projects as well. They produce and sell herbal vinegars, solar-infused oils, salsa, and many other food items from gardens they plant and tend at the center. With money from these sales, the students have been supporting a solar cooking project in Haiti for the past eight years. More recently, they have partnered with Rotary International to help fund solar ovens for refugees in Afghanistan. These are the high-capacity Villager ovens produced by Sun Ovens International, costing over US $10,000 each. To date at least five of the ovens have been shipped. The funds raised by students for this effort already approach US $4000!

Rowena Gerber was recently presented with an Excellence in Teaching grant from Curriculum Associates, based on her efforts to incorporate solar cooking into the classroom. We congratulate her and her students and colleagues for this honor, and thank them for all their wonderful work and dedication.

[This text was borrowed from http://solarcooking.org/newsletters/scrnov02.htm#classroom.] 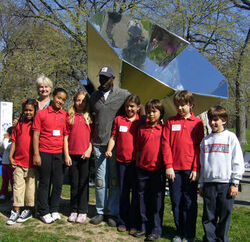 Retrieved from "https://solarcooking.fandom.com/wiki/Miami_Country_Day_School?oldid=119202"
Community content is available under CC-BY-SA unless otherwise noted.