The Minimum Solar Box Cooker is a simple box cooker that can be built in a few hours for very little money. Using ideas developed by many different people, Tom Sponheim and Mark Aalfs attempted to come up with the simplest design that they could devise at the time (1990). They named it the "Minimum Solar Box Cooker." What they didn't communicate with that name was that this is a full-power cooker that works very well, and is in no way minimum as far as its cooking power goes.

What you will need 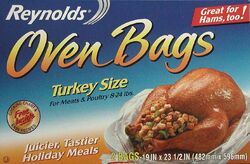 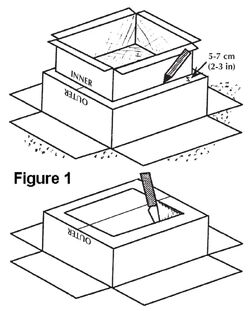 Decide how deep you want your oven to be. It should be about 2.5 cm (1 in) deeper than your largest pot and about 2.5 cm (1 in) shorter than the outer box so that there will be a space between the bottoms of the boxes once the cooker is assembled. Using a knife, slit the corners of the inner box down to that height. Fold each side down forming extended flaps (Figure 2). Folding is smoother if you first draw a firm line from the end of one cut to the other where the folds are to go.

Finally, to make the drip pan, cut a piece of cardboard the same size as the bottom of the interior of the oven and apply foil to one side. Paint this foiled side black and allow it to dry. Put this in the oven so that it rests on the bottom of the inner box (black side up), and place your pots on it when cooking. The base is now finished.

Take the large sheet of cardboard and lay it on top of the base. Trace its outline and then cut and fold down the edges to form a lip of about 7.5 cm (3 in). Fold the corner flaps around and glue to the side lid flaps (Figure 4). Orient the corrugations so that they go from left to right as you face the oven so that later the prop may be inserted into the corrugations (Figure 6). One trick you can use to make the lid fit well is to lay the pencil or pen against the side of the box when marking (Figure 5). Don't glue this lid to the box; you'll need to remove it to move pots in and out of the oven.

To make the reflector flap, draw a line on the lid, forming a rectangle the same size as the oven opening. Cut around three sides and fold the resulting flap up forming the reflector (Figure 6). Foil this flap on the inside.

To make a prop, bend a 30 cm (12 in) piece of hanger wire as indicated in Figure 6. This can then be inserted into the corrugations as shown.

Next, turn the lid upside down and glue the oven bag (or other glazing material) in place. People have had great success using the turkey size oven bag (47.5 cm x 58.5 cm, 19 in x 23 1/2 in) applied as is, i.e., without opening it up. This makes a double layer of plastic. The two layers tend to separate from each other to form an airspace as the oven cooks. When using this method, it is important to also glue the bag closed on its open end. This stops water vapor from entering the bag and condensing. Alternately you can cut any size oven bag open to form a flat sheet large enough to cover the oven opening.

The oven you have built should cook fine during most of the solar season. If you would like to improve the efficiency to be able to cook on more marginal days, you can modify your oven in any or all of the following ways:

Plans in other languages