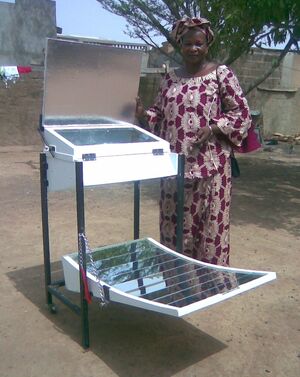 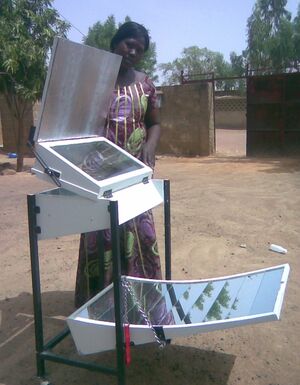 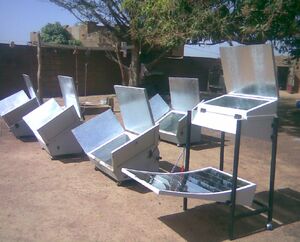 The Nelu-Diass solar panel cooker is an evolution of the Nelpa cooker developed by Gnibouwa Diassana. He has spent considerable time bringing solar cooking to Mali, and this cooker is a combination of components of the Nelpa and and a solar box cooker used by the ULOG organization.

It benefits from the the concentrated heat from the lower concave reflective panel, which does require some moving of the cooker to maintain maximum heat gain, and from the upper solar box. The upper box uses a more passive heat gain, and does not require reorientation during cooking. As is it insulated, it is also better at retaining cooking heat. The next version of the design is planned to incorporate a rear entry to the box cooker.

Retrieved from "https://solarcooking.fandom.com/wiki/Nelu-Diass?oldid=38796"
Community content is available under CC-BY-SA unless otherwise noted.