In order to combat the effects of deforestation in developing countries, where the majority of cooking fires are fueled by wood, New Energy Works Timberframers founded the Nicaraguan Solar Oven Project.

New Energy Works partnered with the local Victor-Farmington Rotary Club to bring the Nicaraguan Solar Oven Project to the needy people of El Sauce, Nicaragua. Many local area Rotarians have donated to the cause in addition to the New Energy Works and Rotary International contributions. The low-tech devices allow families to cook their food using the power of the sun, reducing the need to gather firewood and eliminating harmful smoke fumes while helping slow deforestation. To date, approximately 500 ovens have been distributed to families in El Sauce.

New Energy Works brought on board a Nicaraguan Project Coordinator, Yacarely Mairena (recent graduate of the University of Managua). She is bi-lingual and already working in the El Sauce region for its greater good. Yacareli was a key component to our efforts, particularly during distribution of the ovens.

"Maxine, Jake River, and I were hiking on Ometepe, an island in Nicaragua,when we came upon a young boy who was chopping at wood with an old, dull machete.

He was upset to see us, because we were in a small preserve (looking for howler monkeys, and dang did they find us!) and he knew he shouldn't be there. The boy should have been in school, not stealing wood. Turns out he was collecting lena, or firewood. We found out that the collection and use of firewood for cooking is a colossal mess of unreal proportions in the developing world.

Where do I begin: collecting firewood is the major cause of deforestation in many countries, and therefore the cause of habitat loss, groundwater recession, erosion, ozone depletion and... okay, forget the environment, let's talk about people: the children stay out of school to gather it, scarce family resources are used to buy it, people get sick breathing its smoke. Lung desease is the second largest woman killer, I've been told. I didn't discover all this, but rather some amazing people have been on the topic for a while. Solar Cookers International is great, with info and technology exchange going on from Calcutta to Equador. Then there two organizations that are making and distributing: Sun Ovens Int'l, which make a personal size and the Villager (!) and the Solar Oven Society which makes a less expensive but still good little unit called the Sport. They're similar groups. You could say they are competitiors in the race to do good here. I've tried out both smaller units up here in temperate-ville, and they work wonderfully on a sunny day. 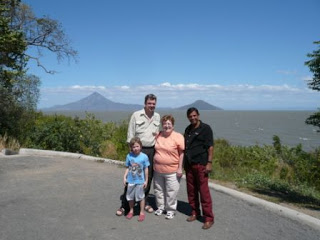 Fast forward a bit: bringing all of this home, people at NEW were excited. No one more so than Karen Parkhurst, who was about to become the next local Rotary president. (That's her in the image to the left with me, Jake and Esteban, our beloved Nica driver, overlooking Lake Managua.) She took the fundraising ball and ran. We now had a team on the project made up of New Energy Works, Pioneer Millworks, the Rotary Club of Manaqua-Tiscapa, and Rotary International. We hired a staff member to coordinate all this in El Sauce, east of Leon, and soon were supplying ovens and training people in their use.

Now we really wanted to get moving, as the need was immediate. But as I told my friend Jeff recently, immediately takes longer in Nicaragua. Sandinistas don't talk to Conservatives who don't trust Sandinistas. There's a new mayor, and new papers to sign. etc. etc. and thus our decision to hire our own staff member, on the ground. This works too, and we should have thought of it months ago. Part of our goal was job creation, after all.

We chose El Sauce because it has a long history of being a sister city to Rochester, NY. Cuidad Hermana is a program originally put together in solidarity with the Nicaraguan revolution. Now it's got a school, a clinic, a program for visiting college kids from the local State University of Geneseo, and more. They call their program Pregnant Cow, for good reason.

Our goal in the companies is to give 10% of pre-tax earnings back into our community or perhaps an environmental organization. This is an interesting tiger by its very needy tail. (To date over 290 ovens have been distributed to families in El Sauce.)"