See also: Global Calendar of Events and past events in Pakistan

Pakistan hosted one of the larger privately sponsored solar cooking programs ever carried out. A British-based organization, SERVE (Serving Emergency Relief and Vocational Enterprises), began work with refugees from Afghanistan in 1980. The previous year, after the Soviet incursion into Afghanistan, nearly 3 million refugees had fled to Pakistan, principally to the Northwest Frontier Province and Baluchistan. The population was made up of largely illiterate rural people, most of whom had lived near the border with Pakistan. A variety of relief and educational programs were offered to the group as they settled in for what turned out to be a lengthy stay in refugee camps.

In 1983, SERVE conducted a survey to assess what the refugees felt to be their most urgent needs. Performed professionally with assistance from UN experts, the survey's results revealed the greatest felt need was for assistance in obtaining cooking fuel. The area had 300 sunny days a year and it thus appeared to SERVE staff that solar cooking would be useful. Devices that were within their financial reach and adequate training in solar usage would be essential, however. Initially, a small pilot project was conducted in one camp with 50 families. These pioneers were each loaned a cooker and taught to use it. The ovens were similar to those in use in India, boxes with glass top and a mirror reflector.

At the end of the project, 80% of the families wanted to purchase the cooker. A few modifications, based on experience from the the pilot program, were made in the device, including making the cookers slightly larger larger and using shiny mylar rather than mirrored glass for the reflector. The cost of the boxes ranged between $60 and $70, which was more than refugees could afford so donor assistance was found to partially subsidize the cost, with refugees paying around $18. A small workshop made the cookers, and supply was able to keep up with demand. Satisfied users of these cookers were their best advertisement.

Eventually, the refugees felt able to begin the trek homeward, after political events changed the situation in Afghanistan. Many took their ovens along, and by that action advertised solar cooking to new audiences. Demand was high enough that a shipment of 780 ovens was sent to Kabul, Afghanistan and sold out, from the back of the truck in a marketplace, in five days. Demand in Afghanistan was higher even than in Pakistan, perhaps due to the ever-present danger from unexploded mines in fields and growing shortages of wood.

By 2000, SERVE donors were suffering from "donor fatigue" and, although there was still demand in both Pakistan and Afghanistan, the solar program was ended. (See Afghanistan.) Between 1985 and 2000, SERVE distributed around 20,000 solar cookers in the area.

The Building and Construction Improvement Programme

Solar cooking did not, however, disappear in Pakistan after the SERVE program ended. In 2003, The Building and Construction Improvement Programme, a Project of the Aga Khan Planning and Building Services, began workin remote areas of Northern Pakistan. The project introduced a number of energy efficient and renewable devices, including a line of solar cookers. Like the SERVE model, the project chose to use a box model. Construction materials were selected on the basis of availability in the area with provisions built-in for replacement of the glass box top.

Master Fazal ur-Rehman of Kundian City in the Punjab, indicates that he has built a number of types of cookers (SCI Rev., Jul 02).

According to Afzal Syed writing in April 2011: "The rising cost of fuel in Pakistan is becoming more of a problem for Pakistanis. People spend 100 Rupees ($1.18 USD) or more a day on cooking fuel. (A bit over 20% of per capita income) Some can’t afford enough to cook all their meals. He sees the CooKit as a wonderful alternative fuel." 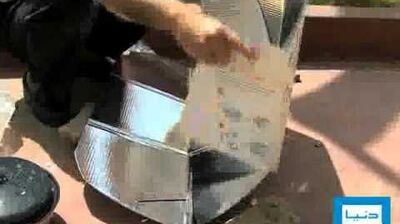 The entities listed below are either based in Pakistan, or have established solar cooking projects there: