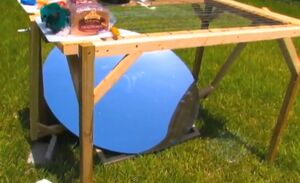 The Parabolic Star Grill is a design for a parabolic solar cooker that incorporates an open mesh grillwork supported by a free-standing wooden structure positioned over a parabolic reflector. It differs from most parabolic cookers in that it offers a little more flexibility when placing the cook pot over the focused light from the mirror below. It has been conceived by the designers at GreenPowerScience.com.

The cook pot support structure resembles a table with an open wire mesh top. Wood was chosen for construction, being relatively inexpensive, as well as it acts as an insulator, and will not heat up as a metal framework would. This provides some safety for users working around the grill. The parabolic reflector below still requires fairly frequent readjustments to keep the light aimed at the pot. They note that the grill can not be left unattended with the reflector in place. The light focus could shift and literally ignite the wooden frame.