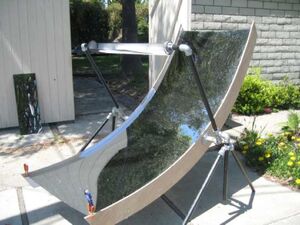 The Parabolic Trough Solar Cooker (McMullin) (or “cylindro-parabolic solar cooker”) has several advantages over other solar cookers. It provides the instant frying/grilling power of a pure parabolic cooker, and yet easier to construct because the reflective surface is only bent along one dimension.

The initial question any solar cooker asks is how much heat is produced. Unfortunately, I don’t have a precise answer. Taking the temperature of a cooking surface is more difficult than taking the temperature of a cooking area. However, the grill produced enough heat during the late summer in Los Angeles to brown meat in about 10 minutes, to cook corn on the cob in about 15 minutes, to burn green beans in about 15 minutes, and to burn eggplant in about 20 minutes. In short, it produced levels of heat comparable to a kitchen stovetop.

Another question a serious solar cook might ask is how frequently it needs to be adjusted. The bad news is that the long focal length means that slight movements by the sun cause the light to quickly miss the target. The grill had to be adjusted about every 10 minutes before the cooking power dropped off noticeably. In addition the finished solar grill is somewhat cumbersome to move around, and is perhaps its greatest design flaw. The good news is that, it cooks quickly enough that it only has to be adjusted once or twice during a cooking.

Retrieved from "https://solarcooking.fandom.com/wiki/Parabolic_Trough_Solar_Cooker_(McMullin)?oldid=87115"
Community content is available under CC-BY-SA unless otherwise noted.