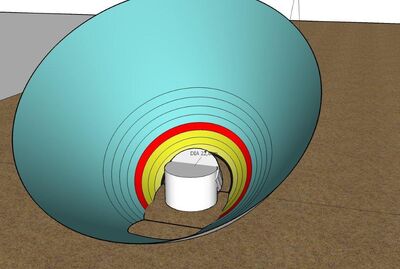 The Parabolical Ground Cooker is a parabolic cooker resting on the ground. This solar cooker has a truly parabolical shape wich can be clearly seen from the illustration to the right. The red line indicates where the angle of incidence equals 45 degree and the angle of reflection equals 45 degree. The yellow zone indicates where the angel of incidence is less than 45 degree and the sum of angle of incidence and angle of reflection is less than 90 degrees. Above the red line the sum of the angle of incidence and the angle of reflection is gradually increasing following the shape of a parabol. In this way all the sunlight that is hitting the reflector is reflected on to the hotpot indicated by the sylinder on the ground. The reflector is cut three times to allow for different angels of the sun. As the parabol is tilted forward, the focus will follow a path, an ark, but only small adjustment of the pot should be needed to stay in focus of the rays of the sun.

The advantage of the model is its simplicity, with no moving parts and no stand needed to hold the hot pot. As such it might be a candidate as one of the cheaper solar cooking models. It should be noted though that this model is just a conceptual design. It has not been constructed or tested.

Retrieved from "https://solarcooking.fandom.com/wiki/Parabolical_Ground_Cooker?oldid=64693"
Community content is available under CC-BY-SA unless otherwise noted.