Patricia McArdle, a member of Solar Cookers International's Global Advisory Council, is an advocate of sustainable, renewable energy, and an international promoter of integrated solar thermal cooking technology. Her award-winning novel Farishta, inspired by the year she spent in northern Afghanistan was published in hardcover and e-book by Riverhead Books on June 2, 2011. Farishta has received the Amazon Breakthrough Novel Award Grand Prize for General Fiction and the San Diego Book Award.  The paperback version was released in June 2012. View the book trailer here.  The audiobook version of Farishta is available on Audible, iTunes, and Amazon.

McArdle has served as the editor of the Solar Cooker Review, a board member of Solar Cookers International and Solar Household Energy and continues to volunteer considerable time demonstrating, writing and speaking publicly about the benefits of solar cooking. In her lectures and demonstrations she argues that the widespread use of this simple technology can dramatically improve the lives of the hundreds of millions of women and children who travel miles from their villages to gather wood every week. Using solar cookers in combination with fuel efficient stoves and retained heat cookers will also dramatically reduce deforestation and CO2 emissions. Cooking and pasteurizing water with the sun can prevent millions of deaths each year from diseases caused by drinking contaminated water and by inhaling the smoke of cooking fires. McArdle has more than thirty years of international and public affairs experience.

McArdle served as a Peace Corps volunteer health educator in Paraguay in the early 1970s. She joined the U.S. Navy and attended Officers Candidate School in Newport, RI in 1974.  She then spent three years as one of only two female military officers at a remote Naval communications base in Morocco.  McArdle is a graduate of the University of New Mexico and has an MBA from Thunderbird School of International Management.  After 27 years as a U.S. diplomat, she left government service in 2006. Her last overseas assignment was as the Department of State's senior representative with a British Army Provincial Reconstruction Team in Northern Afghanistan.  It is there that she began her involvement with solar cookers.

Here in her own words is the story of her "solar cooker epiphany".

"I had heard of solar cookers before I went to Afghanistan, but I knew little about them or their incredible potential to save forests, reduce household air pollution and improve the lives of millions of women.

My solar cooker epiphany occurred on a cold but sunny March day while on patrol in the Hindu Kush with one of the military observation teams. During my travels around northern Afghanistan, I had observed that there were almost no trees and little groundcover left in the region. People told me that the trees had been cut down for firewood or to make charcoal. As we drove that morning up a narrow mountain trail to a remote village for a meeting with local officials, we passed a group of young (five to seven year old) children leading donkeys down the trail.

After our meeting, the soldiers and I were given a tour of the village. The district governor showed us the one remaining “forest” in the area, a small grove of cedar and pine growing just above the village. It was guarded night and day to prevent the trees from being cut down for firewood. The governor explained to us that if they lost their “forest,” the next big rain would wash away the village. I was also invited into one of the family compounds and introduced to the women who were cooking lunch over a smoky fire fueled with what looked like tumbleweed stacked in a huge pile next to their mud-walled hut.

At the end of the day, heading down the mountain, we again passed the children, who were on their way home. They were struggling to carry enormous bundles of the same “tumbleweed” I had seen the women cooking with. As we traveled west into the glare of the setting sun, I suddenly remembered the solar cooker I had constructed out of a cardboard box when I was a Girl Scout many years ago. “Someone should tell these people about solar cookers,” I thought. Since I didn’t know much about solar cookers myself, I did some research. 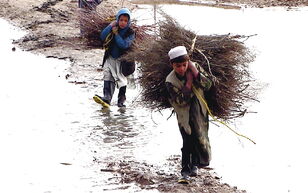 That night, back at our camp in Mazar-e Sharif, I trolled the Internet for information on solar cookers and found the Solar Cooking Archive, managed by Solar Cookers International. I spent the next few evenings learning about this remarkably simple technology. Eventually I downloaded several plans, and asked the British Army field kitchen staff for some old cardboard boxes, aluminum foil and flour to make paste. With the help of the soldiers, I constructed five different box- and panel-type solar cookers. We took them up to the roof of our heavily guarded compound and, over a period of several weeks, tested them and measured the results. The solar CooKit won the competition.

It was clear to me that there was a great potential in this country for the widespread distribution of solar cookers to:

I hoped to return eventually to the village that had inspired me to learn about solar cookers, demonstrate the CooKit, and see how the people would react to this remarkable technology. Several months later, we went back.

It was another cool, sunny day. A small group of men standing in front of the governor’s compound watched in silence as we arrived for our meeting. (Women are not allowed out in public unless the gathering is all female). Before going in to see the governor, I poured a bottle of water into a black pot, put the pot inside a transparent oven (turkey) bag, placed the bag in my homemade CooKit, turned the CooKit to face the sun and went inside with the soldiers. 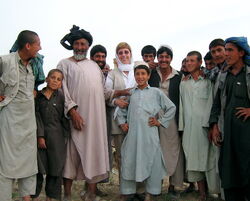 When we came out of the meeting 90 minutes later, the pot was steaming and the crowd had swelled from 10 to about 40 men. They were scratching their beards, pointing at the CooKit and trying to figure out how this piece of cardboard covered with shiny paper was able to boil water. Where was the fire? It looked to them like magic even after I explained how it worked. The pot was clearly very hot, but the cardboard and aluminum foil were not. How could this be? They all insisted on coming up to touch the very hot pot and then the cool foil-covered cardboard to confirm what they were seeing.

One of the men exclaimed, “We could make our tea with this!” The others nodded enthusiastically. Another said he would be able to find cardboard, but “where,” he asked, “do I get that shiny paper?” They all looked at me in silence, waiting for an answer. I wasn’t certain how to reply, because I knew that aluminum foil was not sold anywhere but Kabul, which was more than 100 miles to the south over the Hindu Kush.

Another man smiled, reached into his back pocket and took out a pack of cigarettes. He pulled up the inner foil liner and shouted, “We could use this!” The other men nodded, and several more pulled out their own cigarette packs to examine the foil liners. Within five minutes, these men had figured out a use for this technology and they had discovered a way to manufacture it using a locally available resource. None of them suggested that their wives might be able to cook meals with this technology, but I was still very impressed with their positive and creative reaction to my very brief demonstration. If they only used the CooKit for heating tea water, they would still dramatically reduce the biomass consumption of their village.

I have told this story and given solar cooker presentations many times at the U.S. State Department, the Peace Corps, USAID and elsewhere since my return from Afghanistan. In 2007, colleagues from DC-based Solar Household Energy and I set up a demonstration with several types of solar cookers and prepared typical refugee dishes of dried beans and peas in the courtyard of the State Department's Bureau of Population, Refugees and Migration in 2008. PRM's assistant secretary Ellen Saubry ate a plate of our solar cooked food and stated in an AP video report that this was an important technology which should be used. Seven years later, we're still waiting for some support from the State Department. The Partnership for Clean Indoor Air, a branch of the U.S. government's Environmental Protection Agency, has funded solar cooker projects in Mexico, Bolivia and Kenya. In 2009 I helped coordinate an issue of a PCIA on-line bulletin that focused exclusively on solar cooking.

It is the Defense Department that has shown the greatest interest in this technology over the past several years. The STAR-TIDES group at the National Defense University has invited me three years in a row to demonstrate solar cookers at NDU and at the Pentagon. 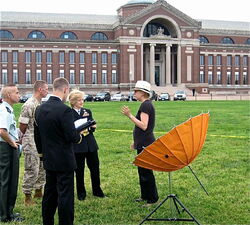 In the past three years, SouthCom has sent me twice to Honduras and once to Guyana to demonstrate solar cooking to military personnel, civil defense officials and university students, as part of annual disaster preparedness simulations. 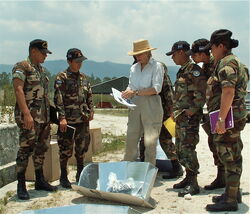 Several U.S. military officers serving at Provintial Reconstruction Teams in Afghanistan have worked with local Afghan craftsmen to build and promote the use of solar cookers. As a former Naval Officer and the daughter of a career Marine officer, I am grateful for and very supportive of the interest shown by the U.S. military in this technology. I only wish I could convince my civilian government colleagues to show the same degree of enthusiasm for solar cookers. Every Peace Corps volunteer going to an energy-starved, sun drenched country should receive training in solar cooker technology. I remain hopeful that President Obama's administration will give more support to the spread of this simple, green, technology that uses earth's most abundant source of energy." --Pat McArdle 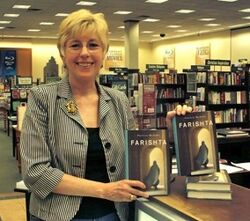 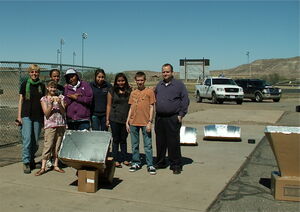 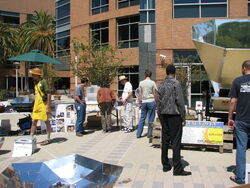 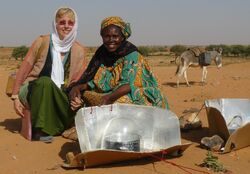 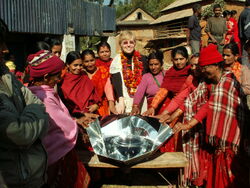 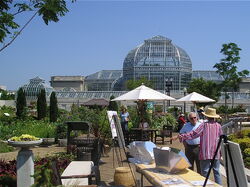 Other audio and video

Patricia McArdle can be contacted through an email form here: http://www.patriciamcardle.com

Retrieved from "https://solarcooking.fandom.com/wiki/Patricia_McArdle?oldid=121759"
Community content is available under CC-BY-SA unless otherwise noted.