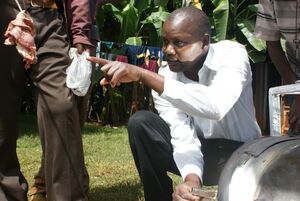 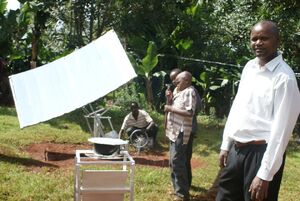 Peter Mwathi is an agricultural economist in Kenya, and also the inventor of a parabolic style solar concentrator, that he has made available for sale to local farmers. By focusing the sun's rays a few meters away, it is designed to be used as a way to sterilize soil in preparation for planting seedlings - a job usually done by burning wood on top of the earth. Farmers can also heat water or roast their produce, such as nuts or coffee beans. The system also incorporates a low voltage electronic sun tracker to efficiently maximize the solar energy.

He made a commitment at an early age to try to find a way to provide farmers an alternative using wood burning methods for preparing their soil. A current problem is that the solar concentrator costs approximately $250, around a third of the average income in Kenya. Although Mwathi allows farmers to buy in installment payments of $62 each, the cost is still a prohibitively large outlay for many. In the last seven months since Mwathi started producing the solar concentrators, just five farmers in and around Gichira village have bought one. Mwathi hopes to expand his project, and lower the costs, by training young people to make the solar devices. He has approached Kenya's Ministry of Youth Affairs to see if they will support the project.

Retrieved from "https://solarcooking.fandom.com/wiki/Peter_Mwathi?oldid=109473"
Community content is available under CC-BY-SA unless otherwise noted.