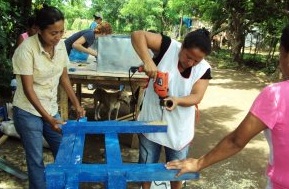 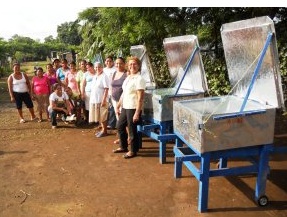 Project Gettysburg-León or FUPROSOMUNIC (Spanish acronym for Solar Program Foundation for Nicaraguan Women) holds two-week workshops that train primarily poor, rural women how to build and use their own solar oven. The workshop also explores the use of the solar ovens, solar dryers and solar methods of water purification to produce dried fruits and teas that to be sold at local markets. They have been able to offer the workshops with the support from Project Gettysburg-León (PGL), a Sister City project supporting sustainable development between Gettysburg, PA and León, Nicaragua.

In addition to giving participants basic carpentry skills, a safer, healthier and more ecological way of cooking, and income-generating opportunities, the trainings serve as encounter groups for the women to share and address personal and community concerns. For example, in the very poor community of Monte Horet outside León, where more than half the homes are little more than shacks with walls of plastic tarp and cardboard, all 10 of the women involved in a solar oven workshop overcame issues of past personal conflicts to build their ovens. Not only were the women surprised at what they could do, but so were the men in the community. They didn’t think women were capable of doing such work!

As a result of the success of this training, with PGL’s assistance, there are now two future projects planned – a second solar ovens workshop to build 10 more ovens in Monte Horet, and a fund to be established for the women in both workshops to purchase wood-conserving stoves as a complement to the solar ovens. PGL and FUPROSOMUNIC will donate half the costs of the wood-conserving stoves (priced approximately $100 each), with the other half paid by workshop participants through a group loan that will be paid back over 10 months.

PGL and FUPROSOMUNIC also sponsored a one-day event at LaSalle College in León, a technical school that focuses on alternative energy. Monte Horet “graduates” taught college faculty how to construct a solar oven to be displayed at the college’s environmental fair, and the college staff were impressed with the community women’s professionalism and exacting standards. For the women of Monte Horet, it was a tremendous boost to their self-esteem, as they had never imagined themselves as teachers to college professors!

[This text was borrowed from http://www.gettysburg-leon.org/pgl/index.cfm/get-involved/solar-ovens/]

Retrieved from "https://solarcooking.fandom.com/wiki/Project_Gettysburg-Le%C3%B3n?oldid=109553"
Community content is available under CC-BY-SA unless otherwise noted.