The Rocket Stove, a popular variety of improved combustion stoves, is an integral part of the Integrated Cooking Method. It is easy to construct, with low-cost materials. These are low-mass stoves designed to burn small pieces of wood very efficiently. Cooking is done on top of a short insulated chimney. A skirt around the pot will help hold heat in, increasing the efficiency.

Rocket Stoves use branches, twigs, small wood scraps, or just about any small combustible material. The pieces of wood or other material burn at their tips, increasing combustion efficiency, creating a very hot fire, and eliminating smoke. The low-mass stove body and insulated chimney ensure that the heat goes into the cooking pot, not into the stove. Rocket stoves used in conjunction with hayboxes can save enormous amounts of fuel, cooking complete meals while using very few resources.

A related design, the Rocket Bread Oven, is constructed using two 55 gallon drums, one inside the other. The outer drum is split open to create an insulated chimney space between the two drums and to allow for a doorway. Baking is done inside the inner drum--in a sealed compartment within the chimney, above the firebox.

Rocket Stoves operates roughly twice as efficiently, and substantially more cleanly, than the open fire cooking methods still used in many areas of the world. Furthermore, the design of the stove requires small diameter lengths of wood, which can generally be satisfied with small branches. As such, sufficient fuel for cooking tasks can be gathered in less time, without the benefit of tools, and ideally without the destruction of forested areas.

Because these qualities improve local air quality, and discourage deforestation, the rocket stove has attracted the attention of a number of Appropriate Technology concerns, which have deployed it in numerous third-world locales (notably, the Rwandan refugee camps). This attention has resulted in a number of adaptations intended to improve convenience and safety, and thus the size of the target audience. The Justa Stove, for example, is a cousin of the rocket stove adapted for indoor use and family cooking needs.

The Rocket stove's main components are as follows:

Overview: Fire based solutions, such as the Rocket Stove, allow cooks to make meals when the sun isn't shining or achieve temperatures that would be difficult without expensive parabolic cookers. However, they do have drawbacks:

An interesting alternative -- at least in the developed world -- is the Sierra Zip stove. By pumping heated air into the combustion chamber quick high temperatures can be achieved with little energy wasted on thermal mass or warm-up time. Ensconced in a cooking system which skirts the cooking vessel, 4 oz of wood will give 2-3 minutes of gas-like cooking.

The Two-Door Rocket Stove can burn both wood and charcoal. It saves a lot of both! Wood fuels are fed into the big door. The small lower door controls the flow of air into the fire which lowers emissions. When burning charcoal, the big door is closed, and the rate of burn is also controlled by opening and closing the lower door.

Adding adjustable doors to a Rocket stove allows for control of the air that enters the fire to speed up or slow down the rate of combustion. More air is needed to start a cold fire and to create a hot fire initially. Once the fire is going, the bottom door is partially closed. Limiting the air increases heat transfer to the pot and reduces harmful emissions. 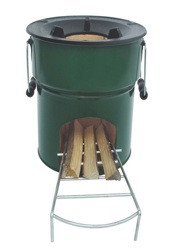 Carbon monoxide is reduced when it is burned up in the enclosed space above the fire. Frequently, enough charcoal is made when burning wood so that simmering can be done using only the made charcoal. After boiling food, the big door is closed and air from the lower door keeps the made charcoal burning. The interior grate and dual doors make the EcoZoom Versa Two-Door Rocket stove slightly more expensive than the one door EcoZoom Dura stove. 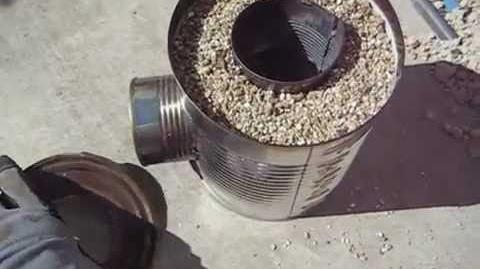