Solar Cooking
Register
Don't have an account?
Sign In
in: Individuals, Manufacturers and vendors, Germany,
and 3 more

Rolf Behringer founded ULOG Freiburg in 1993. Since then he has mainly worked in African countries implementing solar cooker productions and trained experts in the field of solar cooking.

From 2000 up to 2003 he worked for the German Development Service in Namibia. Besides his main activity he supported the Solar Stove Project Valombola based at the Vocational Training Center in Ongwediva. In 2005 he initiated the Solar Food Processing Network while he was working at ISES Headquarter (Intertnational Solar Energy Society: www.ises.org). As a result several workshops and trainings have taken place and the first international conference focusing exclusively on Solar food processing for income generation was held in Indore (India) in January 2009 in cooperation with the Barli Development Institute for Rural Women. A documentation of results is available here. A brochure was developed to spread the idea of solar food processing by showing selected examples. Link to brochures His longterm objective is to extend the Solar Food Network and to implement Solar Food Processing units around the globe. In Freiburg (Germany) he is producing solar box cookers and is running an internet shop. Besides working in the field of solar cookers he is teaching Renewable Energy and Energy Awareness at schools and universities.

During the last decades several organisations implemented many projects trying to introduce solar cookers in domestic households. Experience shows that not only private households can profit from solar cookers but also small busnisses that use solar energy to produce any food product. This example shows a small bakery in the North of Namibia. In May 2003 a Solar Stove was developed in Germany in order to produce 24 loaves at once. In September a second stove was built in Namibia and is used since that time. The small scale bakery is able to bake up to 100 breads a day or about 300 little fish tin rolls. Meanwhile the system was built in India and in Burkina Faso in 2006.

A Technology Development cooperation between Sunsational Cookers Limited and the Bethel Business and Community Development Centre in Lesotho, supported by GloboSol.

Solar Cookers have been deployed in developing countries to alleviate poverty and fight deforestation. The solar cookers have been mainly used for household purposes and are designed to be versatile and flexible. Designing a solar cooker for a specific purpose increases its efficiency. The Solar-Trough-Baking-Oven (STBO), as constructed by Mr. Ivan Yaholnitsky in Lesotho, has proven itself to be an efficient tool to implement in villages where bread forms a major part of the regions diet.

Our aim is to improve the STBO and to provide a construction and implementation-manual.

Since June 2005 the device as depicted above has been in operation at the Bethel Business and Community Development Centre in Lesotho.

“Baking bread is hard work”, but even with manual dough mixing, an income double that of the statutory minimum wage could be achieved.

Based on observations made by Mr. Yaholnitsky we would like to improve the STBO following the criteria:

Some impressions of some activities:[] 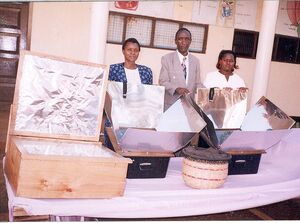