Rwanda is beautiful country of 8 million where 39% live below the poverty line[1]. Five thousand tons of of fuelwood are consumed each day for domestic use (cooking, water heating, etc.). It is expected that by the year 2020 the population will double and the wood use will increase to 10,000 tons/day. The government of Rwanda has major planting and reforestation projects with Rotary clubs involved. Five thousand Acacia seedlings were planted by Rotary clubs on one Sunday. Today cutting of trees without permits and the firing of kilns with wood is illegal. The Environmental Minister, Drocella Mugorewera, at the opening of the Kigali Solar Cooker workshop, quoted the Integrated Cooking Method as one of the best projects for the rural poor and for the protection of the environment. A government committee has been selected to determine the best fuel efficient stoves and fuelwood supplements such as solar cookers with top priorities for study going to the Centre for Research and Technical study located in Kigali.

See also: Global Calendar of Events and past events in Rwanda

This small, landlocked, very populous nation occupies a significant role in solar cooking history. In 1994, when a civil war broke out in the nation, millions of people fled to neighboring then-Zaire (now the Democratic Republic of the Congo) as refugees. This exodus, one of the largest in such a short period of time, initially overwhelmed available services, and this situation did not improve for a substantial period of time. The event occurred just as representatives of the solar cooking community from around the world were meeting in Costa Rica at the Second World Conference on Solar Cooking in 1994, which was sponsored by Solar Cookers International. Between sessions, the assembled solar promoters watched hotel televisions and listened to radios as the news turned ever worse, with reports of cholera deaths from unclean water, lack of food, housing, and other services. The event was the impetus for Solar Cookers International to shift from acting largely as an educational and networking organization to one of demonstrating in practice that solar cooking could play a role in areas where access to traditional cooking fuel (electricity, natural gas, and fuelwood) was limited.

Shortly before the meeting, a new inexpensive solar cooker, the CooKit had been devised by Roger Bernard, a longtime solar cooking advocate from France. The CooKit was subsequently adapted by Barbara Kerr, a prominent US-based leader in the solar cooking sector. Concern for the people of Rwanda was the impetus for planning a new phase in SCI's history, made possible for the first time by the emergence of an inexpensive, but efficient, solar cooker.

In the summer 2003, a team comprised of Rotary groups from the around world traveled to Rwanda, after a long period of planning and consultation, to initiate a project with an emphasis on combining the use of solar cooking with the use of hay box and fuel-efficient stoves. By using solar cooking in combination with heat-retention cooking, the cook can maximize their available solar energy. This is referred to as the Integrated Cooking Method.

Wikipedia article on the climate of Rwanda 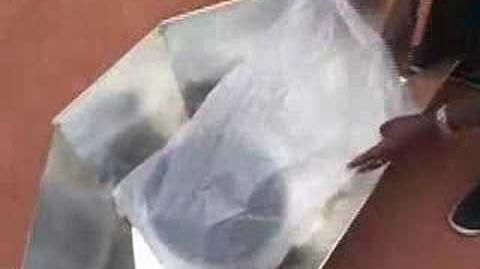 The entities listed below are either based in Rwanda, or have established solar cooking projects there: