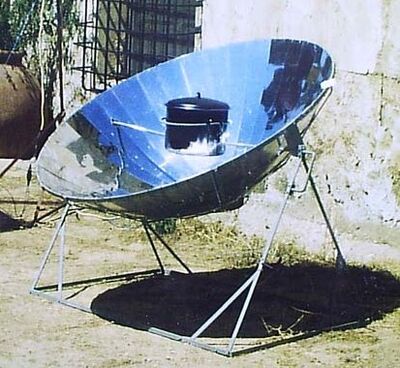 Over 6,000 SK12 type solar cookers have been installed in more than 60 countries worldwide [as of the year 2000]. The SK cookers are parabolic dishes approximately 1.4 meters in diameter. They are designed with a deep focus (the focal area is inside the dish). The deep focus substantially reduces the possibility that users or their children will suffer burns; the deep focus also means that tracking the sun is fairly easy, since the cooker does not need to be repositioned more than every 20 minutes. Additional safety and convenience features include a tracking indicator which makes it unnecessary to look at the sun while positioning the cooker, as well as a simple mechanism for swinging the reflector out of the sunshine to get safe access to the food. Instead of a focal point, the sunlight is focused over a somewhat wider area where the cooking pot is always mounted--further reducing the risk of serious burns. Having a large, dark pot in that focal area also reduces the chance that users or their families will be dazzled by glare from the cooker.

A stable stand for the parabolic dish and a simple system for turning it upside down when not in use also contribute to safety and convenience.

The SK cookers can cook all kinds of foods. A big advantage over simpler cookers is that the SK cookers can fry foods. They are impressively powerful--they can boil 48 liters of water per day. They can cook from about two hours after sunrise to two hours before sunset in the sun, but frequent repositioning is needed when the sun is very low in the sky.

The latest cooker in the SK series (SK98M) can be separated into two parts for easy storage in the house at night. The base of the cooker can then serve as a table while the reflector can be used to amplify the light of candles or lanterns.

According to Dr. Dieter Seifert of Neuotting, Germany, who developed the SK cookers, the materials cost about 60 Euro (about US $60), mostly for a set of thin, but sturdy, anodized aluminum sheets which reflect the sunlight into the focal area where the cooking pot is mounted. These sheets are attached in the parabolic shape to a basket-like support structure which may be made from strip steel or, to hold costs down, bamboo.

With local artisans in developing countries building the support structure and mounting the plates, the entire production cost of the SK12 is about 110 Euro. Dr. Seifert says the SK cookers were designed for easy production in simple workshops, possibly even in places without electricity. No license fee is charged for using the cooker design.

Leading the dissemination of the SK line of cookers is a German organization called EG-Solar. Documentation on these cookers is available from EG-Solar, which also is the source for sample cookers and sets of the aluminum reflector panels. (The cookers and panels are produced by another agency, JAGUS, which provides assistance to jobless youth.) EG-Solar can also help set up workshops and train production workers. More than 50 production workers from many parts of the world have been trained.

Other European development organizations also help communities obtain SK cookers, including an appropriate technology group called WOT at University Twente in the Netherlands and Projektgruppe Solartechnik of the Vocational School at Freilassing, Germany.

At a hospital in Zimbabwe, a Dr. Eder founded a small SK production workshop in 1997, with assistance from EG-Solar. The women accompanying patients (and cooking their meals), as well as local inhabitants of the area, suffered extreme difficulties in finding fuelwood. The workshop now produces four SK cookers per week and the cookers meet almost the total demand for cooking at the hospital.

In Madagascar, a technical training center called SOLTEC produced and distributed 90 SK14 cookers in one year. Dr. Seifert reports that the government of Madagascar is planning to equip 35,000 families with SK cookers in conjunction with a housing program.

ANANDO, a German NGO with a vocational training center in Tangail, Bangladesh, invited a German Technical Studies teacher, Ludolf Bahr, to introduce the SK cooker there. Working with one other volunteer, Mr. Bahr produced 40 SK cookers at a cost of about $80 each. The cost was too high for many of the local people, so the 40 cookers were mainly distributed in exchange for volunteer work.

The European Committee for Solar Cooking Research tested the SK12 in 1994 and had the following comments: "excellent thermal performance for a concentrator … easy one-step pot access; tracking easy but ground has to be level; acceptable to operate; cooker not easy to transport … moderate risk of skin burns and glare …" After some improvements to the SK cookers, follow-up tests in 1997 in South Africa, involving 66 local families who got to try several different cookers for months at a time, have put the SK cookers at about the top of the list for consumer acceptance.

Dr. Seifert believes that the SK cookers are most efficient when used with "haybaskets." (Haybaskets are well-insulated storage containers where a pot of hot food can be safely kept with its heat trapped; partially cooked food that has been heated to cooking temperatures can finish cooking in the haybaskets, making use of the heat already in the food and pot. Using a basket with cotton or wool blankets to cover the pot, with a cushion of hay at the bottom, ensures dry insulation.)

Because the SK cookers cook rapidly, many pots of food can be partially cooked in the SK in sequence and then put to simmer to completion in the haybasket, while the next pot gets its turn on the SK. Dr. Seifert says one SK plus three haybaskets would serve the cooking needs of 10 to 20 people.

Retrieved from "https://solarcooking.fandom.com/wiki/SK12?oldid=77685"
Community content is available under CC-BY-SA unless otherwise noted.