Solar Cooking
Register
Don't have an account?
Sign In
in: Solar cooker designs, Manufacturers and vendors, Australia,
and 3 more 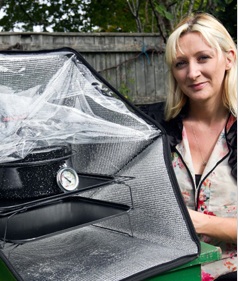 SUNFLAIR solar ovens is the brainchild of Melinda Seller, a former freelance designer in the toy industry. Once highly sought after, as time went on, more and more of her work was outsourced, and at the onset of the recession, her husband lost his job. Not long after, their oven failed. They couldn’t afford to repair or replace it. What to do?

This was when Melinda discovered that she could cook with the sun. Although it began out of necessity, she found that the food tasted fantastic! And not only was she saving on the cost of a new oven, her utility bills were lower too.

Now, solar cooking isn’t a new idea, but it was new to Melinda, and she started thinking that it might be new to others as well. I mean, who wouldn’t want to eat healthier, help the planet, and save money at the same time? Thus, SUNFLAIR Solar Ovens was born.

Supported by her husband, Bill, and her kids, Dawson and Anza, Melinda drew upon her business and design expertise to bring an affordable solar cooking experience to everyone under the sun!