Sri. Sankha Subhra Datta of India designed a new concept for box-type solar cooker in 2002. The key feature of the cooker is that it's designed to tilt towards the sun so that direct radiation is perpendicularly accessible to increase solar irradiance on the cooker face. Two foldable mirror reflectors are conveniently attached at both longer sides of the cooker at an angle of 115 degree with cooker face to boost up the energy collection. The cooker allows the user to cook more meals as the cooker still works when the sun is somewhat low in the sky.

During use, the cooker should be placed facing sun while keeping longer side vertically inclined position. This inclination can easily be changed up to 45 degree with respect to the ground by the adjustable stand attached at the backside of the cooker box. If the inclination is more than 45 degree, the cooker may be turned over in front for the weight of heavy glass reflectors and also for the rotation of line of action of the cooker box weight towards front. The adjustable stand is rectangular in shape exactly like the back support of old pattern canvas easy chair. Standpipes are made of lightweight MS round pipe. The cooker's inclination can be varied by changing the relative position of two rectangular support frames with respect to each other and thereafter held fixed by the help of slots formed by series of long studs.

During reorientation of the cooker, apart from changing of inclination of cooker box, the whole cooker can be rotated in the ground at desire position by the help of caster wheels attached to the bottom but the position of reflectors remain unchanged throughout the working period.

Four black cooking pots, each 1.25 liters, can be placed side by side at the longer side of the cooker on cooking trays. Each cooking tray is suspended from two pivots fixed in sidewalls of the inner box through MS strips. Length of these strips is equal to the cooking pot height. The cooking pots maintain their horizontal positions when changing their inclination due to their own weight.

Design features of the cooker are similar to conventional box type cooker. The shape of the cooker box is however different from a common type. The width and depth of the present cooker are nearly same and the length is about three times of its width. The cooker box length, width and depth are 860mm, 300mm and 260mm respectively. The outer box is made of 1mm thick GI sheet; inner box is fabricated by 0.5mm thick aluminium sheet. 50mm thick layer of glass wool is applied for insulation. Two panes of 3mm thick plain glass are used as top cover. The frame of the glass cover is hinged with cooker box. The pot is to be placed inside of oven by opening of glass cover. Cost of the cooker is Rs.2000 approximately. 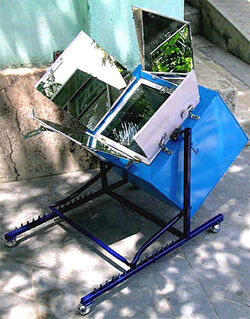 Retrieved from "https://solarcooking.fandom.com/wiki/Sankha_Subhra_Datta?oldid=113491"
Community content is available under CC-BY-SA unless otherwise noted.