Sharon Cousins, in addition to being a former board member of Solar Cookers International, builds solar cookers and cooks with sunshine in northern Idaho, at about 47° north latitude and 3160 ft. (1000 meters) altitude. She is a writer and gardener who is actively promoting solar cooking, both in her own region and in terms of getting this wonderful technology into developing nations, where the need is so great. She has had two articles published on the subject and has been interviewed for an article on her solar cooking activities in the "Neighbors" section of the "Moscow - Pullman Daily News". She is available for interviews and to speak to groups in her region who would like to learn more about solar cooking.

In one of her favorite projects, Sharon helped ten excited kids from a local Roots & Shoots club make EZ-3 Solar Cookers. The cookers (plus some extras for guests, plus most of Sharon's extensive collection and a borrowed Global Sun Oven, compliments of The Natural Abode went along to the park to be incorporated into their end of the school year picnic. Participants and guests made individual pots of soup in their cookers and each member received a cookbooklet with tips and fourteen recipes for their small cookers and pots, from soup to chocolate cake. They are all excited by this new potential for summer fun, as well as excited to learn about what a help solar cookers can be in many parts of the developing world, and how much they can help the environment. 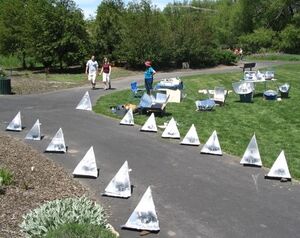 Sharon is now is working on turning her cookbooklet from the Roots & Shoots project into a complete book that would help youth (as well as adult singes/couples or anyone who can use an efficient little cooker for up to a quart of food) all over the world make their own small, efficient solar cookers, with construction directions as well as tips and more recipes than the original version. This is taking longer than she had hoped, but new research down in the San Jose area will result in a book that serves a wider geographical region, so it will be a better book when it is done.

In January, 2010, Sharon began a three year term on the board of Solar Cookers International.

In April of 2010, Sharon began working with Camily Wedende of Sun Cookers International on a project involving middle/secondary age students from a school in Eldoret, Kenya. On Sharon's advice, and with Mr. Wedende's help, enthusiastic students have constructed three different models of solar cookers that can be made from locally available materials and have been observing and experimenting to compare the cookers and see which works best in their location. By taking this approach, students learn science and innovation as well as learning how to cook with the sun. 20 students, who live in refugee camps where there is no fuel and life is very difficult, would like to construct cookers to take home and use. The cookers will be durable (plywood) and the project budget also includes a black pot , oven bag, and booklet on how to use the cookers, as well as a notebook and pen for each student so they can continue their observations and record keeping at home. Mr. Wedende has committed to doing the training and follow-up that makes for a successful project. Sharon has made a commitment to try to raise the needed funds. Contact her if you would like to help or if you would like more information about this project. writersguildgal@moscow.com

Movements need songs! If you know a good solar cooking song or can create one (Hint: Consider setting it to a tune that people already know), here is a place to post it or post a link to it!

(By Sharon_Cousins… to the tune of "You Are My Sunshine")

We cook with sunshine,
Bright glowing sunshine,
The food is tasty, the power's free.
Clean up is easy, the kitchen's breezy,
When we cook with the sun's energy.

One sunny day, dear,
As I was cooking,
I dreamed the world was cooking too,
Everyone cooking, out in the sunshine,
Under skies that stay clear and blue.

No wood or charcoal,
No smoke or fire,
No gas or electricity,
No need for forming more global warming,
When we cook with the power that's free.

When there's a clear day,
With lots of sunlight,
We all can learn to cook with sun.
So we can save trees, and cut pollution,
And 'cause solar cooking is fun!