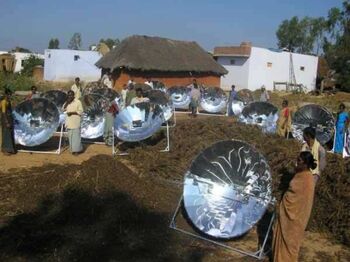 The residents of Bysanivaripalle, Andhra Pradesh, installed the first biogas plants in their region 20 years ago. Having added solar cookers to the mix, they've reduced their yearly CO2 emissions by 104 tonnes a year, and have saved 72 tonnes of firewood (5,832 kg of LPG):

"With 23 biogas plants and 26 solar cookers, we do not have to use a matchstick," says Sadananda Reddy, a progressive sericulturist who was honoured by the Karnataka Government recently for his top quality cocoons. Apart from preparing rice, the solar cookers are used to fry chips, roast peanuts and make traditional Andhra sweets.

The village has come in for praise from the developer of the SK-14 cooker, Dieter Seifert of Germany. In an e-mail message, he says: "There may be places where there are more number of solar cookers, but I have never come across an entire village using just solar cookers and biogas, which makes it a smoke-free village in the real sense."

[Text taken from The Hindu.]