Soheil Salimi was born on July 5, 1992 in Shiraz, Iran. From an early age, he has loved the environment and civil engineering. This great passion for engineering has led to an ambition to choose Civil Engineering as his major in academic studies. He entered Fasa University (2010) and achieved many awards during his undergraduate program such as Top Student of the Year Award in Civil Engineering (2011 & 2014) and also was ranked as the Excellent Student of Civil Engineering, Class of 2014. Soheil started his MSc. in Environmental Engineering (2014-2015) at Shiraz University, Iran; and after being awarded "Université Paris-Saclay International Master's Scholarship" Soheil enrolled in the École Polytechnique in Paris to pursue his education in Master of Environmental Mechanics & Physics (2015-2016).

His capability of performing well in group projects as well as having appropriate organization and management skills caused him to establish a variety of organizations and associations. Hence, he was in charge for different tasks in astronomy associations. He founded Engineers Without Borders - Iran to use his engineering and management skills to improve the lives of others through infrastructure development, sustainable design, and the eradication of poverty in poor societies. Soheil is member of an international project called "A Silk Road to Peace” based in Calgary, Canada, which is led by Mr. Jörg Ostrowski, M. Arch. A.S. (MIT), B. Arch. (Toronto) that aims to revitalize some caravanserais along the ancient Silk Road, at the same time building bridges of peace between East and West.

The Silk Road to Peace

A talented international team of architectural, planning professionals and engineers in Canada, Iran and China, working to recycle parts of the ancient Silk Road starting in Iran, into a modern and sustainable Road to Peace between the west and east, through faithful historical preservation and sustainable redevelopment of caravanserai for local people, communities and economies, and also international visitors, ecotourists, scholars and students, as possible future UNESCO World Heritage Sites.The project is led by Mr. Jorg Ostrowski [M. Arch. A.S. (MIT), B. Arch. (Toronto) & President of ASH-Autonomous & Sustainable Housing Inc. and ACE-Alternative & Conservation Energies Inc.]. The group plans to start with rural areas and eventually move into the cities. The vision is to build a chain of satellite institutes with partner universities, governments, NGOs and industries, for the study and research, seminars and workshops, application and promotion of: appropriate technology, energy and resource conservation, energy efficiency and renewable energy. More information... 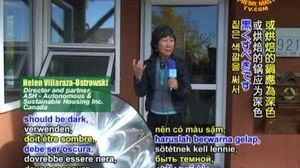 Retrieved from "https://solarcooking.fandom.com/wiki/Soheil_Salimi?oldid=120897"
Community content is available under CC-BY-SA unless otherwise noted.