The cooperative association Sol Solidari was created as a non-governmental organization (NGO) in Empordà, Catalonia, Spain in 2008. The main objective of Sol Solidari is to provide solar cookers, solar ovens, improved stoves, fireless cookers, solar lights and other appropiate technologies to rural communities in the developing world. Sol Solidari is formed by people with experience in sanitary cooperation projects on one hand, and with people with experience in environmental projects, working together on joint projects that combine both environmental and sanitary ojectives.

Whenever is possible, the devices are locally manufactured, where formation on its use is carried out with the help of a local counterpart, which monitor progress on the use of the devices. We commercialize the units and we also give microcredits to spread its use.

Sol Solidari receives grants from governmental institutions, and also donations from private institutions and citizens for the financing of their projects.

Our area of activity has been until now Africa, currently working in Ethiopia, Mali, Cameroon, Burkina Faso, Uganda and Namibia in partnership with a local based NGO.

Our priority areas are: 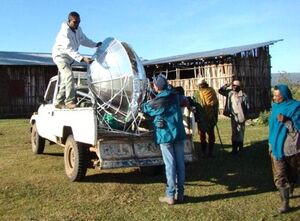