Solar Alternatives and Associated Programmes (SAAP) is a nonprofit, charitable society committed to environmental protection and empowerment of the downtrodden through solar energy applications, particularly solar thermal technologies. Run by the Jesuits, and led by Fr. M.M. Mathew, SAAP conducts research, development, fabrication and installation of a variety of solar devices, including household solar cookers, community solar cookers, solar steam cooking systems, and solar food dryers. They have even developed a solar chapatti cooker. Many of SAAP's devices rely on solar concentrator technologies developed by Dr. Dieter Seifert and Wolfgang Scheffler, and the Solare Brücke organization. SAAP empowers socially and economically depressed groups through employment opportunities as fabricators, as well as vocational training programs affiliated with the National Institute of Open Schools. 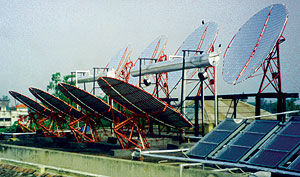 The state of Bihar is located in the north-eastern part of India. It has an ancient history dating back to around 1000 B.C. When today’s civilized world was in the dark ages Bihar had famous universities like Vikramshila and Nalanda. Gautama, the Buddha got his enlightenment in this land, it was the field of activity of Mahavir Jain! But the present is not so rosy! It has got population of about sixty million, a large part of which is rural with an agrarian background.

The social structure is practically feudal. The resources are very limited and about 50% of the population live under the poverty line! The state in not in a position to supply all the energy requirements of such a large population because of its own financial restraints! Vast majority of the people depend the natural resources, such as trees from the forest to take care of their ordinary fuel requirements. Thus forest cover is being depleted rapidly affecting the weather conditions, especially the monsoon, bringing with more poverty. According to a survey in the Capital City, Patna, there is only one tree for every 2000 people here! The forest range bordering Nepal in West Champaran District is on the verge of becoming extinct.

Realizing the ecological crisis in Bihar, the Jesuits of Patna Province had decided to conscientise the people in this regard. Fr. Robert Athickal took the lead and started organizing the students under the banner of student forum for environment called "TARUMITRA" (http://www.tarumitra.org). Fr. M. M. Mathew, one of the activists of this movement took the initiative to look into the alternative sources of energy to face the energy crisis and to some measure remedy the ecological crisis.

In early 1996 Fr. M. M. Mathew went to Gujarat to study the feasibility of promoting renewable energy in Bihar. He got a chance to undergo the training with the German Scientist Wolfgang Scheffler, the inventor of the now famous solar concentrated Scheffler community cooker. After returning from Gujarat with the support of the Jesuit Province of Patna, Fr. M. M. Mathew initiated a solar manufacturing unit in the premises of Xavier teachers training Institute at Digha Ghat, Patna.

This new venture in the field of solar energy by Fr. M. M. Mathew and the Jesuits received vide support from the beginning itself. The Ministry of Non-Conventional Energy Sources (MNES) gave wholehearted support and approved this venture for vide use throughout the country. Our success is due to a large extent because of this help from MNES.

Many engineers and volunteers from abroad supported this solar manufacturing unit with great enthusiasm. Mr. Olaf Kraus of Germany took much interest to build up this venture. The wholehearted support of Solare Bruecke and Mr. Wolfgang Scheffler brought SAAP to what it is today.

Fr. Mathew started the work with a single experienced welder and a few youths from the poorest of the poor. Their dedication and commitment was remarkable. Mainly it is this that opened our eyes to the potentiality of the oppressed deprived of opportunities. So we opened a vocational training program for the weaker and neglected sections of the society.

In 1988 the location of SAAP was shifted to Phulwarisharif premises provided by the Catholic Archbishop of Patna. We have installed SK-14 domestic cookers, Scheffler community cookers, dryers, steam projects, hot water systems, all based on solar energy. Now we are researching on solar motorized rickshaws, steam and hydro-turbines, solar thermal and photovoltaic refrigerators, distillation units, block-steam projects etc. Today Solar Alternatives is also counted as one of the leading fabricators of solar thermal items in the country.

The main field of research was that of solar steam projects. Our main solar steam system is perfected to such an extend that all our end users were satisfied. Many hospitals and medical colleges are approaching us to get the benefit of this new device which will not only save thte atmosphere from pollution but also highly beneficial financially. People are realizing the great benefit of using solar energy. This was one of our main objectives!

Another great accomplishment was the installation of the first commercially viable and fully satisfactory solar block steam system in Holy Family Hospital , Mandar, Ranchi for their autoclave. It saves a lot of precious electricity, and also a lot of time as solar steam autoclaves works much faster than electrical heating. The system was designed by the now famous scientist, Wolfgang Scheffler and developed at our workshop at Phulwarisharif and perfected by the research scholar Mr. Michael Tyroller. This is very useful for medium size steam cooking also. From the reports we have received, the hospital administration is truly happy at the successful functioning of the system. Mr. Michael Tyroller, who did his research here, last year secured first rank in the German University . One disadvantage with the Scheffler cooker was that the cooking had to be done near the reflector. In the block steam system that problem is taken care of and cooking done at a convenient place close to the plant.

We also developed a Chapatti Cooking Device with Block Heating System that has been added to our existing Solar Park at the premises. We have also added to the Park, the solar block steam system designed for cooking, which is the product of the hardwork of two research students from Zurich University, Switzerland - Mr. Adrian and Mr. Benja. Both the students spent about three months in our place, perfecting their technology. We are at present busy with developing Solar tunnel dryer Systems. We have started getting request from North East India and other places for Solar Dryers for drying and preserving agricultural products.

On the photovoltaic front, we installed in coloration with SPRERI,(Sardar Patel Renewal Energy Research Institute) two solar refrigerators at Rural Health Centers at Ararghat, and Dumroan. We thank, the Scientist Mr. Philip who braved the Bihar roads to make a hectic and tedious trip to the rural sites. We are happy to inform that the systems have been functioning well and giving an invaluable service in preserving life-saving medicines. We are engaged in developing solar tracking system for the photovoltaic system which can increase the efficiency of the photovoltaic system by 40%.

Mr. Sharan, Scientist working in Canada who came on a home visit, took interest in our work. He has contributed in developing a pedel-pumping system attached to a cycle rickshaw, specially designed for rural India . All you need is to pedel the rickshaw in a stationary position so as to propel the motor to pump water to the first floor of your apartment. On his earlier visit, Mr. Sharan developed a solar powered cycle rickshaw. This particular research project is still to be perfected.