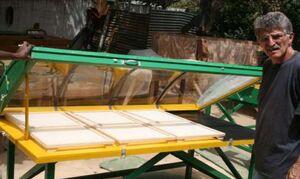 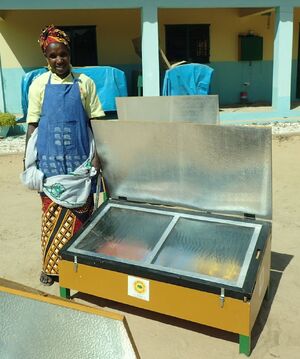 The Solar Association Tiloo is a solar cooking manufacturing company founded by Elena Steger-Kassama and Amadou Kassama in 2006. Initially the company was located in the community of Fajikunda in the Kanifing Municipal Council area of The Gambia, but has since relocated to No. 18 Mr. P. Street, Kanifing South, The Gambia.

With their first batch of solar cookers and stoves produced in 2006, the initial purpose of the association was to make solar cooking more widely known across the country by educating residents about the need for solar cooking.

The Solar Association Tiloo established its own solar cooker and stove making workshop in early 2007 and made it's mission to bring down the cost of living for individual families by using this inexpensive and healthy type of cooking. It is their aim to encourage people to learn how we use the sun for cooking, baking, as well as roasting peanuts and drying fruits.

To further express the purpose of this project, the founders established a solar restaurant called Elena's Solar Food Restaurant with a menu serving both local and continental dishes.

The group currently has two ongoing projects in the Gambia:

The goal is for the student to sell the food that he or she makes and donate the proceeds to the school. The cost of a solar cooker is very affordable and it gives someone a chance to open a small business of selling bread, cakes, and other baked goods.

By solar cooking on a regular basis, you indirectly join the fight to help curb the advance of deforestation in The Gamia and around the world.

The best examples of success is the bakery and the restaurant. They really make solar food popular. Through our daily presentations in the street with delicious solar baked cakes and cookies we generate a lot of interest, and curious patrons. The bakery sets an example of how it is possible to generate an income with solar baking. Our products are to be found along the coast in different supermarkets, small shops and along the beach. The project's restaurant serves solar baked cakes and pastries in a natural environment. The project is also visited by tourists on city tours. The tours are a great opportunity for the visitors to get unforgettable memories of their holiday in Gambia, by bringing a small solar gift for their friends and relatives back home from the Solar Association Tiloo. The feedbacks has been very positive. 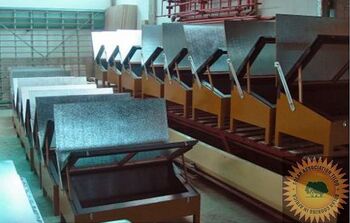 Retrieved from "https://solarcooking.fandom.com/wiki/Solar_Association_TILOO?oldid=109591"
Community content is available under CC-BY-SA unless otherwise noted.