Solar Cooking
Register
Don't have an account?
Sign In
in: Manufacturers and vendors, NGOs, Indiana,
and 6 more

Over two million people are displaced and living in displacement/refugee camps. The ongoing conflict has brought close to a half a million deaths in the recent years. Dispite UN intervention and humanitarian relief efforts the situation has gone from bad to worse.

Solar Clutch has been working with local agencies on the ground to promote solar cooking in the regions where trees are scarce. The risk of rape and death face the women and children searching the remote country side for firewood. Agencies like Darfur Peace and Development Organization, Samaritan's Purse, World Vision, World Relief, Action Contra Faim, World Food Program, and the International Red Cross are all working to bring relief to this region of the world.

“Available material” is a major factor in making solar cookers practical around the world. Take the CooKit as an example: We assume that cardboard is readily available everywhere and cheap to obtain. However most regions of the world where they most need solar cooking you will not find cheap cardboard. You have to buy the cardboard box from a local merchant. And most likely it is torn and has holes in it that you have to patch with tape (which then you have to buy a roll of tape.) Then you have to find aluminum foil….again not easy to locate except in a “Western” supermarket. Price goes up accordingly. Glue is usually available but you have to get a whole tin of it…maybe more than you need. You will also have to buy some razor knives to cut out the cardboard and foil. Your cardboard CooKit still has to be reinforced at the joints and seams and finger tips. At best it will last 6 months, and then you do this all over again. Even though at Solar Clutch we love our Poly-Furnace …. alas the material, however good it is, might as well be from the moon as most places haven’t a clue what polypropylene fluteboard is or Mylar. Is there another alternative material? “Cool Roofing” material. Everywhere in Africa and most of the Third World you will find roofing pan that is galvanized or zinc coated. In the past the galvanized coating has been dull and oxidized over time. But with of the improvements in zinc coating you will find zinc pan that is highly reflective to the level of aluminum. In the effort to reflect the heat in the tropics the zinc roofs are now looking like mirrors dotting the country side. I noted this April 2012 in Ethiopia. So I went to the market in Addis Ababa and purchased some flat rolled zinc tin of medium grade thickness. With the help of my Ethiopian crew we made a CooKit. We had to cut it with tin snips and bend the seams with a wood board for a straight edge. The “fingers” we bent over as “dog ears” too keep them locked in. We dulled the sharp edges by rubbing stones against them. The cookit won’t fold up in a little packet but who cares? It is washable and can be left outside or inside. The cost was just about $6 which is about the same cost of buying material for a cardboard and aluminum foil cooker! I took it to the Afar region of Ethiopia and tested it against our Poly-Furnace cookers. It did its job just fine and although was not as bright as the Mylar, the practicality and availability of material make it much more indigenous option and reproducible by the average guy and definitely will outlast many cardboard cookers. 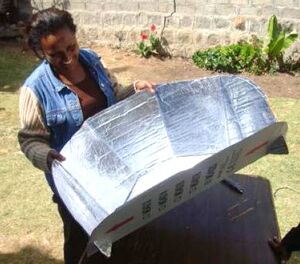 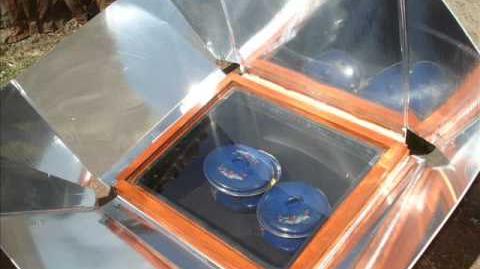