The Solar Connect Association (SCA) started their solar cooking projects in Uganda in 1994 with the support of several organizations, including the World Wildlife Fund of Switzerland. These solar cooking projects resulted from the depletion of biodiversity, concern for the conservation of the beautiful local forests, and the well-being of the rural poor. SCA wishes to find practical, local solutions to these issues.

Between its inception in 1994 and August 2014, SCA has distributed 50,000 cookers in Uganda, South Sudan, eastern Congo, and Burundi. SCA is moving from NGO to social enterprise and to date employs 64 people, 70% of whom are field women marketers mainly selling solar cookers to villagers in their localities and others working on the production floor.

SCA produces all the CooKits, solar box cookers, hay baskets (heat-retention cookers) and Lorena Stoves, and outsources parabolic solar cookers from traders who get them from China. SCA has expanded from the Mbarara District to five other districts near Kampala city, working silently to contribute to the mitigation of climate change and improve livelihoods of rural people in this part of the world and seeking to share experiences with other stakeholders.

If you are going to western Uganda to visit Queen Elizabeth National Park, or to Bwindi Impenetrable Forest for mountain gorilla tracking, the SCA is located nine miles away from Mbarara on Mbarara-Masaka Highway at the Biharwe trading center, just opposite the Igongo Country Hotel and Cultural Museum. (Their building is just opposite the gate of the hotel; many tourists also stop there for lunch and sightseeing.) SCA has a Renewable Energy Center Building there which sells and displays solar cookers and other energy-saving stoves, Monday through Saturday from 9.00 am to 5:00 pm.

To understand the relevance of SCA's solar cooker project, it is necessary to look at how forests have been cut in most parts of Uganda, and how intact forests are being menaced.

A large, mostly agricultural-based population inhabits Uganda, the majority of whom live in abject poverty. This poverty and lack of awareness has led to the following problems:

The seriousness of the situation was well illustrated on a radio talk show made by Brother Anatoli, a prominent traditional herbalist of Banakaroli Brothers in Kiterede Diocese, Masaka District. He complained that the biggest problem for herbalists is the diminishing number of herbal trees and plants that have been rampantly cut for firewood, charcoal making, cattle ranching, and agriculture. He suggested that ways have to be found to reduce the felling of trees and that people should plant medicinal trees and plants on the sides of their farms and homes. 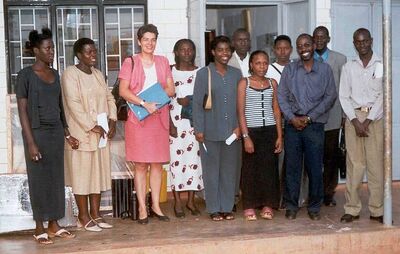 Young girls are particularly enslaved because they are forced to go out each day and look for firewood. The destruction of forests and availability of free sunshine throughout the year are fundamental benefits of solar cookers.

Through observation and close contact with rural communities, where extreme hardships suffered by the subsistence farmers and their families were observed, SCA was motivated to start the solar cooker project.

They persistently improved on solar cookers between 1994 and 1998, using at first cardboard and plywood cookers, then parabolic solar cookers and CooKits. The solar dryers are also being constantly modified to suit different conditions of use. SCA tapped into the large unemployed local workforce and hired carpenters and metal workers to produce the first batch of 300 plywood cookers and 700 cardboard box cookers, which SCA began distributing for free in the districts of Masaka, Soroti, Tororo, and Kampala. For this initial phase of the project, SCA received backing from Gruppe Ulog and assistance in the form of free materials from EG-Solar. Foundation Lord Michealham of Hellingly bought the first office furniture and provided funds for transporting the materials and personnel. In June 1994, WWF-Switzerland started to support the project, and SCA went on to produce on average at least 900 solar CooKits and 80 parabolic cookers per year. Now over 10,000 solar cookers are actively used in homes throughout Uganda. The population supported by Pvei Project in Virunga uses an unknown number in eastern Congo. The Pvei staff was trained by SCA on how to make and use solar cookers.

SCA decided to sell this idea to rural people, 100% of whom use firewood to cook. Solar energy can contribute a great deal to the goal of saving the remaining forests when it is used to cook food and dry fruits and foods.

The extremely simple and inexpensive solar cooker is starting to revolutionize lives in project areas. Solar cookers limit the health hazards of inhaling smoke and people can drink clean water by first pasteurizing it using solar energy. Food that used to be wasted during bumper harvests is now solar dried and "kept for the rainy day." People have used solar drying for centuries, but not in such a modern way.

SCA promotes solar cookers and solar dryers to help the development of the rural poor in a cost-effective, participatory, and sustainable way. Young women and men are generating small-scale jobs for themselves, including metal work and carpentry, canning fruits, baking small cakes and bread, and boiling drinking water.

As a result of SCA projects, people not only use solar cookers but are aware of the importance to rationally use forest resources so as to protect the environment and future generations.

The impact of solar cookers and dryers since 1994 has been rising income levels and improved sanitation in homesteads using solar cookers. Married women can work their fields while the sun does the cooking, raising their work productivity. Women are also baking cakes and bread and canning fruits using the cookers, and some are drying fruits for market.

Also, girls are liberated from having to walk long distances looking for firewood each day. Instead, they are now free to attend school, and the number of girls enrolling in village primary schools of targeted areas is rising. Trees are cut less often and previously bare hills are starting to get shrub and wild tree cover, demonstrating the positive environmental impact of solar cooking. Most of all, people are aware of the consequences of their actions and their effect on the environment: in SCA's view that is a very important development.

These factors, coupled with the effect that the solar cooker has had in stemming waterborne and respiratory diseases due to smoke inhalation and a wish to slow the pace of the rural exodus to cities, are what make the solar cooker a tangible and exciting solution to a severe local problem of firewood scarcity. For eight years now, over 10,000 solar cookers are in use throughout the country.

Encouraged by these results, SCA will soon begin to include fuel-efficient stoves in its activities so that when there is no sunshine, firewood can still be economized. SCA wants to open focal point offices in the regions targeted so that the beneficiaries themselves do much of the fieldwork, enabling SCA to devote more efforts on partnership and resource mobilization.

However, looking back at SCA's experience over the past eight years, they understand that one of the biggest obstacles is educating villagers about this technology. SCA noted that at training workshops, village PR women and men were only moderately successful. SCA devised an educational campaign tailored to village life and the illiterate population. The innovative campaign features a video-recorded documentary by local actors using solar cookers in which their benefits are dramatized. After SCA conducts workshops, they now show the video in villages using a TV and portable generator. One of their future projects is to make a video play featuring local villagers to be shown in villages as part of the awareness campaign.

Currently SCA sells the solar cookers and solar dryers at a cost 15% higher than the original production cost. They are slowly phasing out cooker donations as awareness increases. While the proceeds help finance manufacturing and distribution costs, SCA looks to the very timely WWF financial and technical support, without which this project would find difficulty. The WWF Project Assessment carried out in August 2002 brought out weakness of SCA, some of which management was not aware of. A strategic plan for SCA was made during the assessment and the project can be expanded. SCA estimates that it will take three years to cover the whole Albertine Rift Eco- Region in Uganda, and their final objective is to be able to export the solar cooker and dryer to other sunny countries of East Africa facing similar deforestation problems. The solar cooker solution will address the primary needs of the rural Albertine Rift population for whom the basic necessities of life are very limited, and at the same time conserve forests.

In conclusion, in many cases the simpler a device is, the greater its impact. Clearly, the inexpensive solar cooker can dramatically improve sanitation, support a balanced diet, improve quality of life for the rural population in project areas, and slow the destruction of forests. The solar cooker has 1,000 positive consequences for people and the environment.

In the villages of Kikokwa, Ruharo, Biharwe and Oruchinga Refugee Settlement in Mbarara in western Uganda, women use solar cookers quite frequently in the dry season, and even in the rainy season when the sun comes up. The total number of participating households in these four villages will reach over 2,000 by the end of 2007. 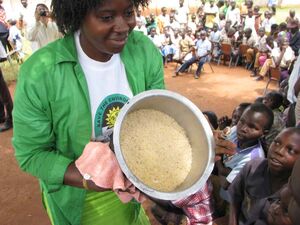