An affordable solar box style cooker can be constructed from transparent sheet plastic (polyethylene), some fibrous material, and four reasonably straight sticks (or possibly the plastic could be secured on top with small stones). The oven comprises a “nest” of fibrous material- in this case shredded coconut husk- about 200 mm high with a cooking cavity approximately 450 mm diameter and 150 mm deep. 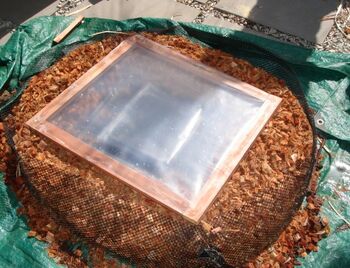 Commonly available transparent sheet polyethylene was stapled to a 500 mm by 500 mm frame made from 40 mm by 20 mm battens (like a double-glazed window with an effective aperture of about 0.25 m2), which was placed over the cavity. The cooking vessel was a 200 mm square pressed steel pan 50 mm deep. A small sheet of the same plastic formed a lid to the pan to maximize direct solar gain to the pan and to minimize heat loss by evaporation/convection.

A series of cooking tests were conducted on clear sunny days during March 2007 in Perth, Western Australia (Latitude 32° S) with maximum air temperatures of 25 - 32 °C (77 - 90 °F). A mass of water plus grain of 1 kg was placed in the pan, and placed in the cavity at 11am local solar time. In all cases satisfactory cooking was achieved before 15:00 local solar time. A dish of chicken and vegetables and a 1kg leg of lamb were also fully cooked.

The tests demonstrated that by using an aperture of 0.25 m2, practical cooking temperatures and times can be achieved with transparent sheet plastic without the need for complex reflectors to increase the effective aperture or glass to increase the heat trapping.

The “nest” eliminates the need for a box, and could be made from any locally available fibrous material, such as bark, grass, straw, cloth or sterilized animal manure. While the performance of the oven can be enhanced by being deeper, blackened and by using one or two sheets of glass, these tests demonstrated that satisfactory cooking can be achieved with as little as 50 cents (US) of sheet plastic in a wide range of circumstances temperatures and/or shorter cooking times) would always be desirable within cost constraints.

The test was standardized using an electronic probe thermometer immersed in 1 liter of water in the pressed steel pan used above. Temperature measurements were taken every 15 minutes. Temperatures of 105 - 120 °C (221 - 248 °F) were obtained in the cooker without the pan of water. The first enhancement was to place a black steel plate under the pan. As this showed a marked increase in performance, it was used for all further tests, which were: • Single glass sheet • Double glass sheet • Double Tedlar® plastic sheet The results for these tests are shown in Fig. 3. All glazings achieved the 80 °C (176 °F) cooking threshold within 3 hours, with the black metal plate making about 7 °C (45 °F) difference, which is an important increase at these temperatures. The single glazing, double glazing and double Tedlar® achieved the 80 °C (176 °F) threshold at least an hour earlier than the double plastic and achieved maximum temperatures of about 15 °C (59 °F) higher than double plastic. Tedlar® was chosen as it is durable at high temperatures and has low infrared transmissivity than polyethylene. 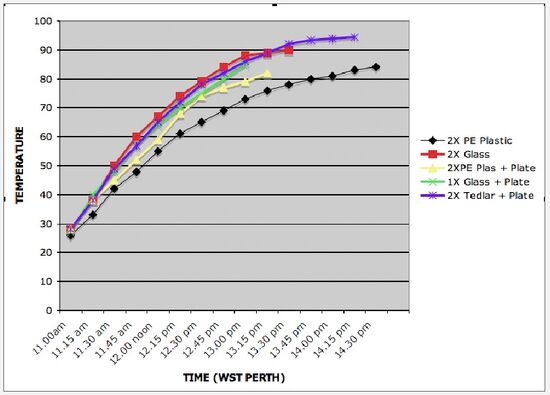 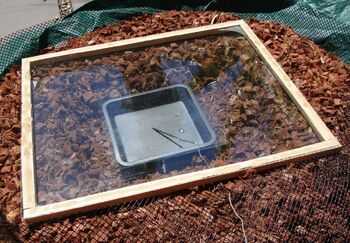 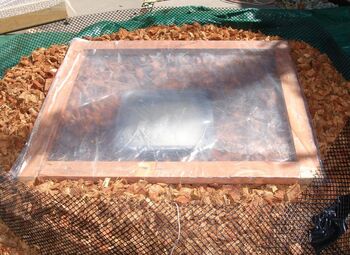 Retrieved from "https://solarcooking.fandom.com/wiki/Solar_Nest?oldid=114084"
Community content is available under CC-BY-SA unless otherwise noted.