The partnership of The Methodist Church of Haiti and The United Methodist Church has evolved over 10 years as a 501(c)(3) non-profit organization called Solar Oven Partners UMC. Based in Brookings, South Dakota (USA), HSOP is a teaching/training program that distributes high-quality solar box cookers only to trained individuals, typically women in Haiti.

The teaching is all done in the native Kreyol language by a highly motivated Haitian husband-and-wife team, Montas and Ramonde. Montas is the Country Director and Ramonde is the Director of the cooking seminars. The project is also assisted in Haiti by Milcar, who assembles ovens independently as well as with the United Methodist Volunteers In Mission teams that travel to Haiti three times per year. Our purpose is to help mitigate the systemic problems of hunger, poverty, and environmental destruction caused by deforestation. Solar cooking, solar baking, solar water pasteurization, and environmental awareness make up the core curriculum of our seminars.

The recent trip to Haiti in March was a great success and the hospitality our team received from the Haitian people was amazing. A young man named Pierre who has roots within the area of recent solar oven distribution, has been instrumental in helping provide the logistics of housing, food, and laundry for the teams at the work sites. Pierre has also been instrumental in organizing the seminars.

When we arrived at Flamand, our warm welcome was not limited to those working with us; we were graciously welcomed into the community by everyone. We were continually stopped as we walked about the community by people who recognized us from the work site and were anxious to engage us in conversation. Time and time again we were greeted with, “We are so happy that you are here!” 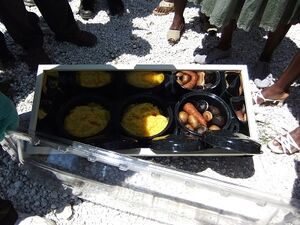 It is always interesting to see the talents that exist in these communities. Next door to the place we were staying was a young man who did wood working. We needed to have more of a certain wood piece used in the process of oven assembly and this neighbor was able to make us two of these pieces built to our specifications. Some of us were blessed with an opportunity to tour this young man’s father’s wood working shop farther down the road. The artistry of his work was very impressive. We saw examples of his work ranging from ornate wood framed mirrors to coffins.

The community of Flamand is located somewhere on the way to Cote de Fer. I say somewhere as we were never able to gain consensus among Haitians as we looked at a map, to determine where exactly we were. Flamand is located in a large charcoal production area. We saw several examples of charcoal burns being set up to produce charcoal. We were told that the going rate for a large bag of charcoal was approximately $17. With the price of charcoal being what it is, participating in our training program and receiving a high-quality solar oven for a nominal fee of $12.50 makes great sense on a purely economic basis. We are interested in more than the economics though; with each charcoal burn, more of the limited number of remaining trees are eliminated and most likely not replaced. This leads to a host of negative environmental problems such as the continued loss of topsoil with no root systems to hold it in place when the rains come.

Our work site was set up on the grounds of a local Baptist school. Montas, the Haiti director taught seminars in the church on-site, Raymonde gave participants hands on cooking experience with ovens set up in the large open field behind the school, and the assembly of the ovens took place beneath the welcome shade of a large tree just inside of the wall of the school compound. Milcar, the Haitian assembly expert helped the members of the team learn how to do things right. With Milcar’s guidance we were able to assemble 200 solar ovens during our stay in Flamand.

People who had not been part of the seminars, but had seen the wonderful food prepared by Raymonde and the seminar participants, were anxious to know when and where the next solar cooking seminars would be held. Montas will be teaching and distributing ovens in Les Cayes in April. Milcar has already begun to assemble ovens for these seminars with another anticipated distribution of 200 ovens.

The next team of volunteers from the United States will be leaving for Haiti in July. The dates of the July trip have been confirmed as July, 6 through July, 17. The location of the work site of the July team is yet to be determined.

One of the difficult things in working within a place like Haiti is the nature of assessing progress. Over the years Haiti Solar Oven Partners has made every effort to collect statistics on solar oven use, but the language barrier on top of a host of other issues that come with working in the developing world, make it difficult to gauge our impact.

On Friday, March 2, 2012 HSOP will take further steps in obtaining useful feedback from solar oven recipients by sending a team to Haiti with the specific task of interviewing solar oven cooks. Montas has worked to bring together 200 solar cooks to take part in a survey. HSOP has always used this survey, but now HSOP has teamed up with Assistant Professor of French, Molly Krueger Enz, Ph.D at South Dakota State University’s Modern Language Department along with some of her students to present the surveys in French and Creole. This will be the first time that a team has been sent to Haiti with the sole purpose to gather statistical data for the program. It is our hope that they will gather useful information that will assist us in finding ways to best serve the people of Haiti. 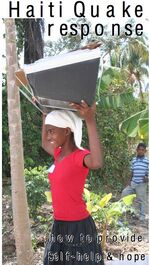 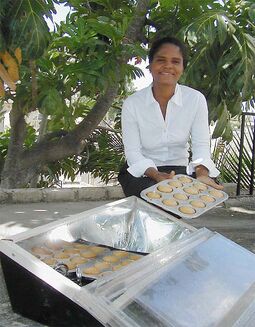 Retrieved from "https://solarcooking.fandom.com/wiki/Solar_Oven_Partners_UMC?oldid=126399"
Community content is available under CC-BY-SA unless otherwise noted.