Solar Punch is a solar-powered musical group from Hastins-on-Hudson, NY that uses music to educate audiences about the environment. By using solar energy exclusively to power their performances and demonstrations, they believe that they become a solution to the climate challenge. They want to "inspire by doing... by showing...by inter-acting":

"In remote farm villages. In mountain resorts. On islands and in urban areas. Our sound and show are portable. We are able to get most of our gear into a few suitcases, making it possible for us to bring our show to remote regions all over the world...
"We are passionate about both the content (message) and the package (music) we want to entertain, thrill and enlighten but we also want to make sure our facts are correct, our information is current and our demonstrations are effective...
"As we travel, we develop media and materials to help transmit how we work, why understanding and protecting the environment is a great thing and how the message itself is cross-cultural, cross-generational and world embracing..."

The group began showcasing various solar cookers at their events in 2008.

Solar Punch band members learned about solar cooking through activities in the USA and abroad. During climate-solution tours in India, the group learned about institutional solar cooking from their friend and mentor Deepak Gadhia. In November 2013 the band participated in a 9-day, high-altitude solar trek in Nepal featuring solar cooking, led by ecologist Maarten Olthof of the Vajra Foundation Holland and Ramkaji Paudel of the Vajra Foundation Nepal. In July and August 2014, the group was invited by the US State Department to tour Haiti with a focus on solar energy; the group conducted several workshops on solar cooking in and around Port au Prince and in Cap Haitien. 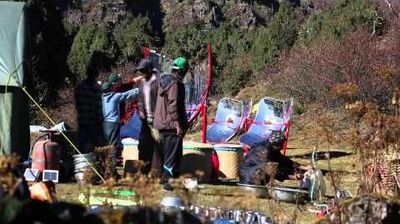