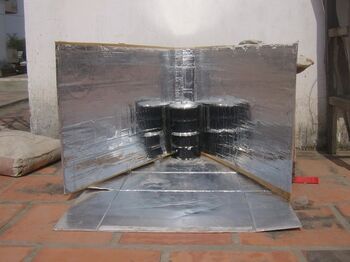 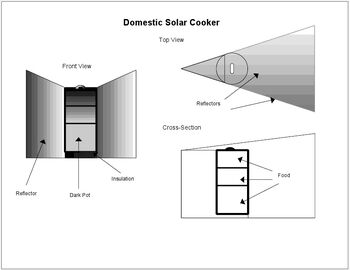 The Solar Rice Cooker is a solar panel cooker designed by Christopher Jordan. He has been doing research experimenting with various styles of solar cookers in Southeast Asia. At this latitude the sun travels a route that is virtually directly overhead. The sun rises and sets in a line vertical to the horizon. The side reflectors of the cooker are fixed in a 'V' configuration. The opening at the front of the reflector, allows it to be oriented towards the sunrise in the morning, and then rotated midday to face the path of the setting sun. The cooker will receive good solar exposure throughout the day. Cooking pots should be insulated from behind at the rear of the reflectors, typically with a thick cloth, to avoid heat loss.

The cooker incorporates a flat reflective base panel, which allows the upright reflectors to be rotated without having to disturb the cooking food. Typically, other panel cooker designs have a more open reflector panel configuration. They can require more adjustment while cooking to maintain the orientation to the sun. They are meant to track the sun as it moves in an arc across the sky in areas farther from the equator.

The rear section of the cooker is relatively tall, and allows for charcoal blackened cooking pots to be stacked, for the cooking of multiple dishes at one time.

Jordan has also been interested in finding ways to extend the available cooking time solar cookers are able to offer. Either in inconsistent cloudy and sunny weather, or once the sun begins to set for the day. He has begun to add black colored rocks below some of the cooking pots early in the day. The rocks will heat up throughout the day, and act as a thermal flywheel to maintain an even cooking temperature, and also give back enough heat to extend cooking times. However, regardless of the style cooker, the rocks need to be insulated to retain their heat, once the sun nears the horizon. He did some experimentation with rock salt as a storage medium, but found it too viscous to be practical. Most people have access to bricks and rocks so perhaps these is the most practical means of heat storage.

He has also managed to pasteurize 20 liters of water per day using the cooker.

The design uses inexpensive materials, less than $5 US, and can also use various recycled materials for the reflector sides as well. A simple design often allows for more options with the construction materials.