Many different systems of solar cookers have been introduced. The wealth of different designs is very refreshing. It also demonstrates that the solar cooker is still in its infancy and will hopefully have a great future, not only in helping to fight climate change but also in making a difference to the life of many people.

Most solar cookers have some sort of reflectors to concentrate the energy of the sun. The solar steamer uses no reflectors but concentrates the solar energy by creating steam from a relatively large collector area and applying it to a smaller cooking area. As the solar steamer is using steam as heat transfer medium, it is an indirect cooking system. This allows the design of a split system where the thermal solar collector can be placed at some distance (e.g. on the roof) apart from the place of cooking (e.g. in the kitchen). The cook is not exposed to the sun shine and can use the steam at whatever hight is convenient and culturally acceptable.

This makes it a very convenient cooker for large quantities of food. Using simple stackable steaming pots several dishes can be cooked simultaneously. The steaming process is very similar to traditional steaming processes and should find easily cultural acceptance.

The solar generated steam can also be used to heat large pots of stew or soup by guiding the steam directly into the liquid were it condenses and releases the heat of condensation. This leads to a gentle agitation of the food without burning it.

In its technical design the solar steamer makes use of the availability of standard evacuated tube solar collectors which are available from China at low cost. 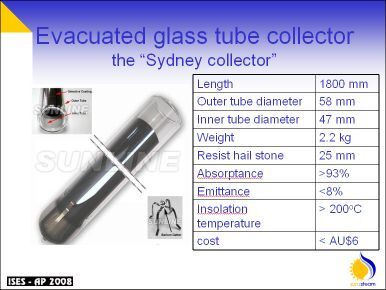 As can be seen from the sketch above the basic concept is very simple. The solar collector is filled with water. Because of the high efficiency and the good insulation of the evacuated glass tubes the water will start boiling when exposed to sunshine. The steam will be guided to the food steamer using a flexible, steam resistant hose. 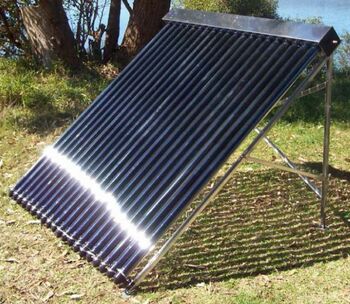 The final steamer is a bit more sophisticated as it has to be made sure that the glass tubes never dry out. A trickle feed system with integrated heat exchanger provides a continuous supply of fresh water to replace the water lost as steam. It also prevents the built-up of salts and contamination in the solar collector. Because the system contains a large quantity of boiling water in glass tubes, it has to made absolutely sure that there is no pressure building up in the system.

In order to keep cost low Sun2Steam is offering a conversion kit which can be easily fitted to a standard low cost solar collector. This kit will be supplied from Australia whereas the solar collectors can be directly sourced from a low cost supplier.

A solar collector with 20 tubes 1.8m long and 57mm diameter can be bought in China for about US$200. The conversion kit including 5m insulated steam hose depending on exchange rate will be about US$200. Adding 25% for cost of shipment, taxes and duties leads to a total cost of about US$500 for the solar steamer without the cost of installation and training.

This puts the steamer into the upper cost bracket of solar cookers. However all materials are long lasting and the complete cooker should easily exceed a lifetime of 10 years. The cooker can easily help to prepare food for 10 people. This brings the per capita cost of the solar steamer down to about US$50.

There are also some additional benefits. The solar steamer can produce about 5 litres of high quality distilled water a day resulting from the condensed steam. An optional conversion kit will allow to produce more than 100 litres of safe, pasteurised drinking water per day.

A presentation describing the solar food steamer can be found here: [1] 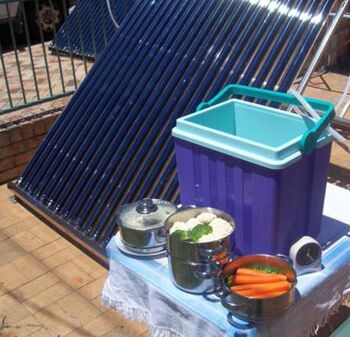