Tom Hoffmann’s company, TM Hoffmann Enterprises is on the mission to mainstream solar cooking with sunlight in as many modern households, as possible. He is introducing the Solar Z ©, a newly patented solar thermal cooking appliance system for use in the modern kitchen. The Solar Z system enables access to solar energy with practical ease without leaving the kitchen. The Solar Z is an integrated user friendly technology for mainstream solar cooking in order to scale up to a new level of everyday solar cooking use. The Solar Z appliance is seamlessly operated from inside the building. It is automated and mechanized for remote control by positioning, operating, and extending a solar cooking chamber out into the environment for optimum sunlight collection. This new Solar Z interface technology for solar cooking keeps all cooking steps in the contemporary kitchen while utilizing free energy. This shifts and lowers the use of present day dirty energy kitchen appliances within the modern kitchen system. This results in LESS dirty energy consumption and environmental effects by utilizing a new integration with solar energy. This is a game-changer.

Tom Hoffmann has been a champion of solar cooking for many years. In 2004 he began working and cooking with solar thermal cooking, and that was when the Solar Z project was born. In Tom’s research, two critical issues stood out. First, portable ovens require the hassle of leaving the modern kitchen and are not practical for everyday use. Second, the “In-the Wall” solar cookers are not flexible enough to adapt to solar light directions, season changes, and building orientation. The Solar Z solves both.

TM Hoffmann Enterprises was established in 1980 to invent, develop, and market new products. In year 2000 the business expanded into engineering consulting and teaching services in science and engineering instruction with an emphasis in materials and energy conservation to create sustainability for the future.

Tom Hoffmann has a B.S. degree (cum laude) in Industrial Technology Engineering including a business Minor from San Jose State University. Tom has over 25 years experience designing computer hardware for IBM and other engineering industrial companies. He is a successful Inventor and holds 9 patents, 5 patents as an inventor with IBM, with 4 patents on his own products, two patents awarded for the Solar Z solar Appliance system. Tom has been teaching & mentoring for 18 years, integrating conservation principles into Science & Engineering to meet our 21st century needs. He was selected and profiled in the 2011 Silicon Valley Technology Exhibition “Invention” by the San Jose, Dept of Cultural Affairs for his contribution to innovation as an inventor. 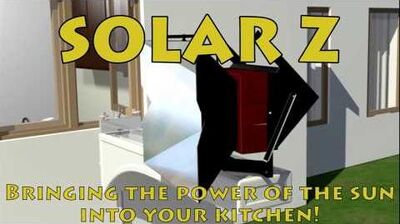