Warning: Only fruits should be canned in a solar cooker! All other foods must be canned using pressure. 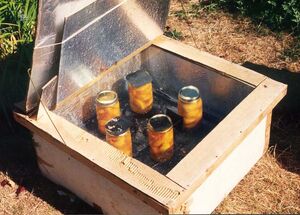 "Almost half of the food produced in the world goes to waste due to lack of a means to preserve it." - Dr. Dieter Seifert

"If I could use my solar cooker for only one thing, it would be for canning," says Eleanor Shimeall. "Processing in a solar cooker is much simpler than conventional methods. It takes me about 10 minutes of preparation time starting from a bowl of fresh fruit to placing the jar in the cooker. An added bonus is that the benign heat of the sun does not destroy the jewel-like colors of the fruit."

Eleanor is such an advocate of solar canning that she has been giving demonstrations in the field without benefit of kitchen facilities. She has also included a chapter on this subject in her book, Eleanor's Solar Cookbook.

She says she uses canning jars or jars such as those used by commercially prepared spaghetti sauce, which have a rubber ring bonded into the inside of the screw-on cap.

Eleanor uses the "terminal sterilization" method: begin with clean glass jars and lids, add the fruit or tomatoes (Microbiologist Dr. Bob Metcalf recommends adding lemon juice to tomatoes when they are canned to make the contents more acid), sugar or salt (if desired), and water to fill up to the neck of the jar. You must leave space for expansion of the contents during cooking. Screw lids onto the jars as tightly as you can and place them into the solar cooker perhaps sitting in a container that can catch any liquid that escapes from the jars. After the jar heats up to boiling temperature, it will boil over. After the jar cools (and perhaps a few days later also) tap on the lid to make sure that it is still concave and tightly sealed. 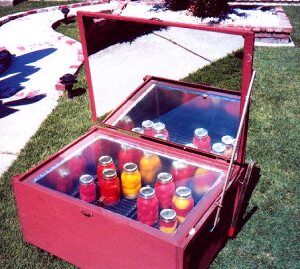 Lids with a rubber ring are made to release steam during canning. Once the correct temperature has been reached, the contents of the jar will boil and flow under the tightly screwed-on lid. Remove the jars one-by-one as each one boils over. Wipe clean, set aside away from drafts to cool down slowly. As the jar cools, the lid is pulled downward to form a vacuum seal. Check each cool jar to make sure it is sealed properly by hitting it with a spoon and listening for a clear ringing note, or gently press down on the lid making sure it doesn't move up and down. If a jar did not seal, add more liquid or another tomato and reprocess. The quality will not be impaired.

Solar canning is safe for acid foods only. Acid foods are fruits and tomatoes, or their juice, jams, jellies. DO NOT CAN MEATS OR VEGETABLES IN YOUR SOLAR COOKER!!! Don't even add a sprig of parsley as botulism can grow on any non-acid food!

See this page in other languages[]

Although Solar Cookers International is aware of hundreds of people canning safely in a solar cooker, and has not received any reports of problems, we have received the following comment on this article, and we feel we should include it to indicate that there is a controversy on this issue:

"We do not, and cannot recommend these canning procedures, even for fruits. I have never seen any heat penetration work published or referenced to know these procedures take care of target microorganisms for all different fruits and tomatoes. If it was this simple, we would have the same process time for every fruit, even in boiling water. Different foods and packs heat differently while processing in the canner. They are misinterpreting "all you need is boiling temperature." The goal is not to just bring the syrup to boiling and stop heating. Plus, when syrups or liquids boil out of the jar, you run the risk of lids not sealing, since those surfaces which meet should be clean. Also, we set goals for desirable headspaces and evacuation of air from jars before sealing for good vacuums and quality during storage. Our recommendations do not include solar canning or the description you have provided."