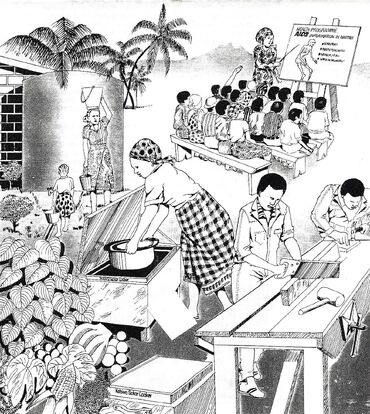 News of the idea that cooking can be done with free sunlight can be met with a great deal of both interest and skepticism in developing countries, where cooking has been done with traditional cooking fuels. These are typically biomass fuels, and people live with respiratory problems from the smoke of open fires. Communities have concerns with fuel supply shortages, rising fuel prices, and the increasing time spent searching for what little wood is available that can be collected.

Generally, when people in fuel-short areas witness their first solar cooking demonstration and taste their first solar cooked food, the skepticism is replaced with enthusiasm. After the initial enthusiasm wears off, differences among individuals become noticeable. Some people will avidly pursue solar cooking, some won't care, and many will be interested but will need more encouragement before taking action toward becoming a solar cook.

When solar cookers are introduced briefly with little follow-up, low rates of adoption of solar cooking results. However, when a long term program of awareness creation, skills-teaching, follow-up, and trouble-shooting is put into place, adoption of solar cooking has successfully taken place. As with most innovations, adoption does not happen all at once. In any community, some people are more interested in being innovators than others, some actively resist change, and most people are somewhere in the middle.

The benefits of solar cooking[]

In these pockets where solar cooking is taking hold, solar cooking is received gratefully. Solar cooking users in developing countries have named many benefits that they have personally experienced. Here are some commonly heard sentiments from solar cooks around the world.

Those are the most commonly cited benefits among users in general. Sometimes, solar cooking communities invent new uses for the free source of heat. Solar cookers have been used to boil rice straw in a paper-making process, to extract beeswax, in fabric dying, to dry small quantities of fruit, and to kill insect larvae in supplies of food staples before storage. See Non-cooking uses.

The Taste Atlas has provided a map of Africa showing which local dishes are popular in different regions.