The best solar cooking pots are ones that are made of thin, dark metal with a lid. Whenever we hear reports of people having trouble cooking in a solar cooker, we most often find that they were using pots with polished finishes, which reflect light away from the pot instead of absorbing it. Unless you're cooking with a parabolic solar cooker where the light is being focused on the bottom of the pot, it's very important to use dark-colored pots that absorb light and transform it into heat.

Clear pots will also work, especially with dark colored food ingredients, and pot lids can be either dark or clear. It is important to always cook with the lid in place so that the moisture from the food doesn't escape and fog the plastic bag or other glazing.

The material that the pot is made from will also affect how quickly it heats up and how well it retains the heat. Here are a few points to keep in mind:

Ideally, the pot/cooker combination should be able to cook a large enough meal to feed the entire family, which can have many members in some cultures. Some introductory projects have not succeeded because the amount of food cooked was not enough to meet the needs of the families who participated.

Glass jars make good pots either clear or painted out the outside. They may cook slightly better darkened. Also, darkening the outside of food containers will protect some of the B Vitamins. When painting the jars, a strip of masking tape placed from top to bottom before painting can be removed when the paint is dry to leave a tidy strip of clear glass for visual inspection of the inside.

When using jars for cooking, make a hole in the lid of any non-canning jar, such as mayonnaise jars, peanut butter jars, etc., to prevent steam buildup. Dome and ring canning jar lids that are designed for food preservation automatically release excess steam pressure yet are safe only when used on canning strength, food preservation jars. The thickness and strength of non-canning glass jars is not intended to take the strain of steam under pressure and could break explosively unless vented.

Some low-fired earthenware pots do not initially cook well although dark colored, hard-fired earthenware pots with glazing work very well. Perhaps the poor performance of some earthenware is due to liquid soaking through and evaporating on the outside, or perhaps it is due to the thickness and porous nature of low-fired clay pot sides. Experimentally, in the efforts to use low-fired, unglazed earthenware, the goal has been to approximate the hard-fired pots by filling the pores and to providing a form of glazing. On a homecraft basis, this has been done by saturating the pot with food-type oil, fat or natural resin which both closes the pores and changes the surface. Oil also will conduct heat rather well and this may be part of what improves cooking in low-fired, earthenware pots following oil treatment. Light colored earthenware needs to be darkened on the outside only, perhaps by rubbing a dark food, nontoxic dark powder or soot from clean wood into the oil coating. Even so, there may be forms of low fired earthenware that are difficult to use. 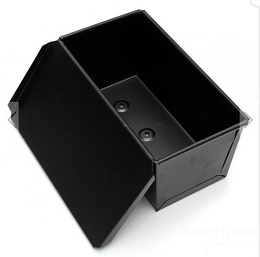 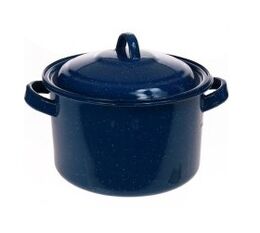 Inspired by traditional Graniteware, the Stansport GSI Enamelware blends old-fashioned charm and functionality into one sturdy package. Plus, three-ply construction maximizes heat distribution for even cooking.

In the USA, it is very easy to find used crockpots in thrift stores that contain an inner ceramic pot with a glass lid that is perfect for solar cooking.

Pot lids can be homemade by turning the pot upside down on a flattened piece of metal and drawing an outline. Cut the metal about ¼ inch (.6 cm) outside the line. File or sand the sharp edges to dull the cut surfaces and protect the fingers. This may be done simply by rubbing a rock along the cuts. Working regularly around the lid piece with pliers, bend the edge down at the line. Sometimes the fluting looks nice. If necessary, cut from the edge into the line to allow the pieces of edge to overlap. Darken the outside of the lid and heat it for several hours before using it with food. Temporary lids made be made by the same method using a brown paper bag and creasing the paper at the line. These also need to be heated alone for several hours before being used with food. Sometimes small holes are punched in a lid to allow moisture to escape and produce a drier crust on foods such as breads or breadcrumb toppings, cakes and cookies.

Nutritional research in great detail has been done by Professor George Hammons and others at Philander Smith College in Little Rock, Arkansas, USA. After analysis of many different nutrients in food cooked equal times by conventional methods and by solar box cookers using dark pots with lids they concluded that solar cooked foods retained nutrition as well as or better than foods cooked by conventional methods in spite of the longer cooking times required.

Small pieces of glass may serve as lids on many different pots, as mentioned previously. The question as to how much vitamin loss occurs when food is cooked without a pot lid or under clear glass needs to be researched. Judging from color changes, there may be some vitamin or nutrient change if food is exposed to bright sunlight while cooking. This may be more important when cooking liquids than when cooking solids, since liquids will circulate by convective flow exposing a greater proportion of the food to the sunlit edges. Riboflavin, a major B vitamin destroyed by light, is found in milk and milk products, eggs, liver, kidney, grass, fruits, leafy vegetables, yeast, etc. These foods with light-sensitive vitamins definitely should be cooked in dark containers.

Research is still needed comparing the effects of solar cooking with food exposed to the sunlight after it has passed through various layers of glazing with solar cooked food using lids. Research is also needed on whether or not there are significant amounts of aluminum compounds absorbed into the food from aluminum pots when foods, particularly acid foods, are cooked at the relatively low temperatures for extended periods of time typical of solar box cooking. Until the facts are established, foods should be cooked with dark covers and aluminum pots not be used unless no other pots are available. Also, there are unresolved questions at this time about the possible uptake of metal compounds into food cooked in tin cans.

David Delaney recommends creating a "greenhouse pot" for solar panel cookers. Details can be found in the following articles:

Teong Tan did side-by-side controlled tests using various pot/glazing configurations. What was not expected was that the pot with a clear glass lid had outperformed the pot with a metal lid plus oven bag. He states that this could be due to:

The other advantages of using a clear glass lid are:

Gourds to be used as pots need to be fully ripened, scraped and cleaned to a thin hard shell and, if of a light-skin variety, need to be darkened on the outside. Gourds almost completely filled with food cooked better than gourds with a little food in the bottom. Experimentally, like with low-fired earthenware, treating inside and outside surfaces with vegetable oil or animal fat seems to improve the cooking times. Low temperature oils which scorch to a useful dark brown are olive oil, used lard, and peanut oil. The point at which oils will darken can be lowered by utilizing old oil that has been used for cooking, perhaps which still has food particle in it, or which has an added emulsifier.

The Santa Domingo gourds tested were kept sitting upright while they grew. After harvest, they were dried outdoors in the shade for some months until the seeds begin to rattle. Then the tops were cut off and the seeds and inner pulp removed. They were scraped to a hard surface inside and out. Our test gourds held between 1 and 1.5 quarts (.95 and 1.4 liters) and after preparing as pots were almost spherical with 3 inch (7.5 cm) openings. The sides were approximately 1/8 inch thick (.3 cm).They held liquids, did not flavor the food and produced cooked food over a period of many weeks. Heat seemed to penetrate slowly. Gourds cooked faster with lids made of a small squares of clear glass rather than dark lids, which sacrificed some level of B Vitamins in some foods. This was judged to be a minor effect compared to the convenience of being able to grow your own solar pots in some cases.

On an experimental basis, where very large gourds are available their shells might be evaluated for use as inner boxes. If they proved successful, used in conjunction with gourd pots in an insulated pit or other outer insulation, the materials needs for low temperature SBCs in equatorial regions might be reduced to simply foil for the inner surface of the large gourd and the glazing...or perhaps to only the glazing? This is highly speculative and cannot be appropriately evaluated at 34.4 N. Latitude where our work is done.

. Built by Andrew and Margot, it has been tested successfully in France and Poland. The pot is designed for use in solar panel cookers, especially in the Nordic countries. Thanks to the greenhouse effect, its thermal properties are improved compared to traditional solar pot. Click here for more information.]] 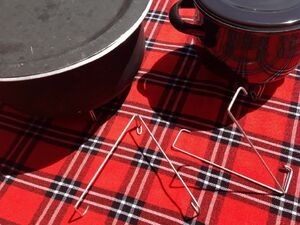 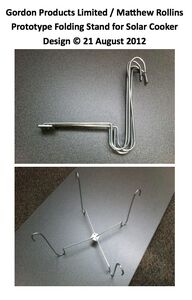 Matthew Rollins has designed a collapsible pot stand to work with a cooking bag. 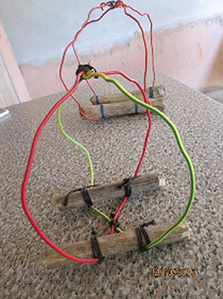 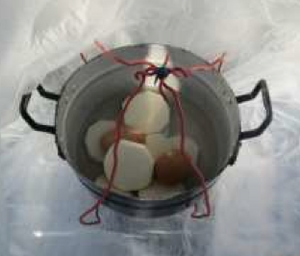 SunLife, working in Ghana, has developed a simple wood and wire harness to elevate a cook pot, as well as, provide a way to lift the hot pot either with or without the cooking bag enclosure. The wire frame also maintains an efficient shape for the enclosure.

When cookware with a black surface is not available, it may still be possible to effectively use reflective or colored cookware with your solar cooker. Basically, it involves using a black cloth to cover the cookware after placing it in the cooker. Place the cloth as close to the pot surface as possible to minimize heat loss. Neelaratna Geekiyanage, from Sri Lanka, reports that he has used this technique to cook, pasteurize water, and make copra from scraped coconut to extract high quality coconut oil. He calls it the NG method. 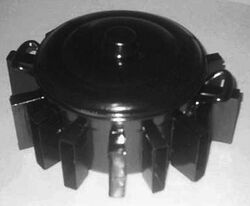 Bernhard Müller has created a small cooking chamber and pot combination by inserting a black painted glass jar, with metal top, inside of a slightly larger clear glass jar with a similar top. The two metal tops should be either riveted or screwed together with stainless screws.

An extremely important feature is to punch a pressure relief hole through both tops. Without it, there is danger of explosion if the lids are sealed too tightly. Care should be taken when cooking with glass jars to avoid accidental breakage. Some jars, like the Mason style used for food canning, are made with heavier glass than is typically used in commercial food sales. While stronger, it does not compare to the strength of Pyrex cookware. The inner jar painted black will become quite hot.

Blackened coffee can with glass lid[]

Build your own HotPot bowl[] 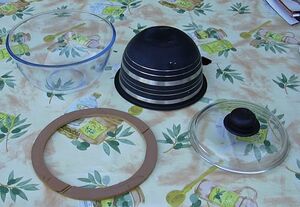 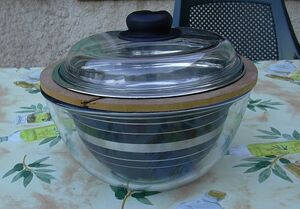 A few creative solar enthusiasts have been working on ideas to make a HotPot bowl that is inexpensive and easy to use. They incorporate a black pot inside of a larger Pyrex style bowl and lid with an insulated handle. As seen in photos, the addition of a wooden spacer ring has helped provide a seal between pots of slightly different sizes.

Candidates for components include: