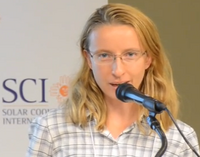 Solar Household Energy Executive Director Sophie Brock is responsible for Solar Household Energy’s varied initiatives to carry out its mission. She works closely with SHE’s Board of Directors, and oversees the efforts of SHE’s associates and volunteers. Sophie has been working in environment and international development since 2005 with Greenpeace, USAID, and local NGOs in Democratic Republic of Congo, India and Haiti, where she also introduced solar cookers. During her four-year association with SHE, Sophie has assisted SHE in many capacities, including analyzing field project impact evaluations, researching large solar cooker projects in Asia. More recently she has been leading a solar cooking advocacy effort aimed at the Global Alliance for Clean Cookstoves. She began her association with SHE as a Research Associate in 2010, and later became Senior Program Manager before being promoted to Executive Director in October, 2014.

Retrieved from "https://solarcooking.fandom.com/wiki/Sophie_Brock?oldid=99713"
Community content is available under CC-BY-SA unless otherwise noted.