Sperancea Gabone has been an active solar cooking promoter in Tanzania since 1999 and has demonstrated solar cooking to thousands of people there. 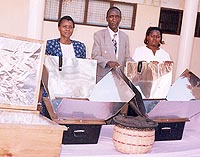 Retrieved from "https://solarcooking.fandom.com/wiki/Sperancea_Gabone?oldid=118004"
Community content is available under CC-BY-SA unless otherwise noted.