See also: Global Calendar of Events and past events in Sri Lanka 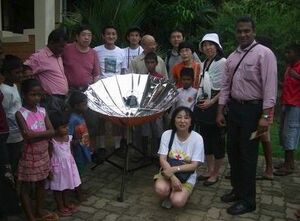 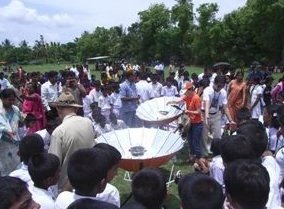 A solar cooking project was established in Sri Lanka in 2001 by E. Abeyrathne of that country's non-profit organization, the EMACE Foundation. The country is very suitable for solar cooking, with good annual sunlight, an ever-diminishing supply of wood and a large proportion of people living in rural areas. In 2002, 21% of the country's land area is forested (FAO, though more recent estimates of the National Geographic Society suggest 17%, with a substantial rate of decrease {-1.6%} from what was estimated as around 84% in 1880). Alternative fuels are very scarce, and the nation's civil wars have created scarcities of many kinds along with substantial violence and economic instability.

EMACE is an NGO in Sri Lanka. In early 2000 the organization contacted Solar Cookers International to inquire about how the organization could go about introducing solar cooking to the people of Sri Lanka. After several interchanges, EMACE director Abeyrathne went online with the solar cooking discussion group and posted a request for experienced solar cooks to come to Sri Lanka to help. Two Canadians, Lee Sentes and Kathleen Manion, were at the same time looking for just such an opportunity. The two had recently returned from a project assessing solar cooking suitability in Madagascar and had good experience to share.

They spent eight months in Sri Lanka, providing skills training to EMACE staff and to villagers in four separate locations in the country, based on criteria which included amount of sunlight, shortages of fuel, levels of deforestation, and villager income.

Workshops on how to build, use, and maintain solar cookers were conducted. In addition, several larger cookers were built for bakeries and to serve the needs of refugees living in camps. Public interest in the work was very high, with extensive coverage by various media. EMACE also brought a range of other organizations into the work, including women's groups, to further spread knowledge of solar cooking. In the original project, a simple box cooker design was used; the device is relatively easy to make in a village, using locally available materials and workmen.

Village groups quickly had distributed over 50 cookers. Later, carpenters were found who would make the wooden box cookers used in the project, and distribution for these and other solar products was started in the cities. All profits from these centers were funneled back into the project to allow sustainability and, hopefully, expansion.

Later the project expanded to 11 villages. Part of their planning included purchase of machinery, which permitted them to make other wood products (such as furniture) as well as the cookers as a way of funding the organization's future. Sri Lankan solar cooks worked on a solar cookbook that showed ways to adapt traditional Sri Lankan foods to cooking with the sun. The possibility of demonstrating other varieties of cookers was also discussed; a French variety of parabolic is under consideration.

A planned follow-up evaluation has yet to occur, but a reply to a 2000 SCI survey indicated continuing growth in the program. EMACE is clearly the largest ongoing solar cooking program, but another group also works in the country, the Saviya Development Corporation, which indicates it produced and distributed over 100 cookers in 2003.

The entities listed below are either based in Sri Lanka, or have established solar cooking projects there: