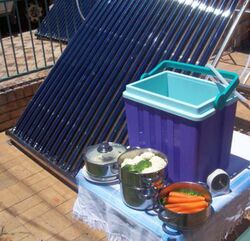 Heinz-Joachim Muller, an expert in water sterilization, started experimenting with evacuated tube water heaters in 2006. He soon was fascinated with the perceived disadvantage of evacuated tube collectors: Under certain conditions they don't just heat water, they produce steam! This lead him to start the company Sun2Steam PTY LTD, which is paying special attention to small scale applications that incorporate solar generated steam. Among the first first products is a solar food steamer.

Retrieved from "https://solarcooking.fandom.com/wiki/Sun2Steam?oldid=127891"
Community content is available under CC-BY-SA unless otherwise noted.