The SunFocus Solar Electric Oven with an electric back-up cooker option was designed by David Chalker in 2010. Drawing on 25 years of solar cooking experience, David founded the Sun BD Corporation in 2004, and now offers a solar box cooker solar powered only SunFocus model. The SunFocus solar electric oven's electric heating elements is rated at 465 watts / 120v. It has a built-in thermostat which will turn off the electrical heating element once the cooker has reached 150°C (300°F). The cookers are made in Waterloo, New York, USA.

This solar cooker has a molded plastic exterior shell. The oven has double panes of glass, gasketed with EPDM rubber gaskets for a tighter fit for greater heat loss retention. The cooking chamber has a fairly large cooking area16.5 cm (6 1/2") deep with upward sloping sides 13.5 cu/in. at the bottom and 20 cu/in. at the top of the cooking chamber.

The SunFocus oven is designed to sit on a flat surface, it's back reflector adjustable to angle the sun's energy into the  cooking chamber and the two side reflectors are stationary at a 50 deg. angle. It relies on the electrical back-up on cloudy days or when the sun is low in the sky, or for winter cooking in higher northern latitudes. 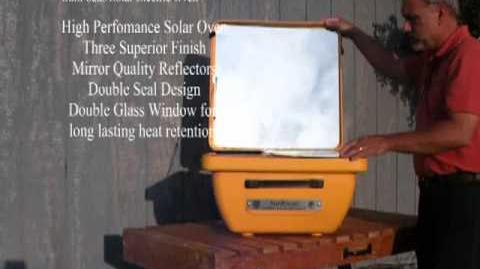