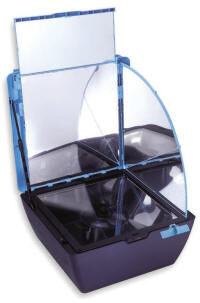 A novel solar cooker from Portugal--the Sun Cook--is now being marketed by SunOK. The Sun Cook is a concentrator-type solar cooker with many solar box cooker characteristics. It weighs just over 11 kg (24.2 lbs) and has a cooking area of 35 cm (13.8 in) by 41 cm (16.2 in).

The Sun Cook uses ideal, non-imaging optics (also known as compound parabolic concentrator, or CPC-type optics) inside the box, concentrating incoming solar radiation by a factor of 1.46 times onto a black, Teflon®-coated aluminum absorber plate, upon which the pot sits. The internal box walls are shaped as two identical asymmetric CPCs in one direction and two distinct, asymmetric CPCs in the other.

The Sun Cook’s unique system of external, anodized aluminum reflectors directs addition sunlight onto the absorber plate and cooking pot. The primary reflector, which can be vertically extended via a slide-out mirror, is attached at the back of the cooker’s lid. The second reflector can be attached on either side of the lid, and fans open to accommodate the primary reflector’s tilt.

Five types of injection-molded plastic are used in the cooker, allowing for precise shaping of the cooker’s sophisticated optics and the potential for mass production. The five plastics ¾ Polybutylene Terephthalate (PBT), Polypropylene (PP), Polyamide or Nylon (PA), a Polyamide-Polytetrafluoroethylene blend (PA/PTFE), and Polyoxymethylene or Acetal (POM) ¾ were chosen for their resilience at varying temperatures and levels of ultraviolet radiation exposure. Oven-type insulation is used inside the box and below the absorber plate. The Sun Cook’s “window” is double glazed with tempered glass and sealed to prevent moisture infiltration.

If needed, cooking times can be controlled by a unique solar “clock” that works in conjunction with the side reflector to cast a shadow across the cooker after a specified period of time.

The Sun Cook is available at a suggested retail price of EURO 249 (approximately USD 290), and comes with two cooking pots and a recipe book. 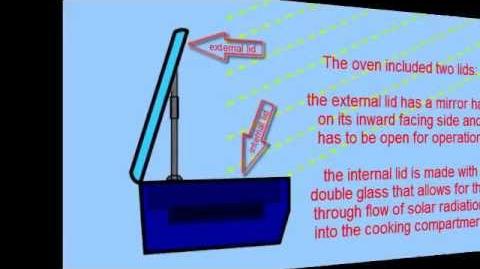 Retrieved from "https://solarcooking.fandom.com/wiki/Sun_Cook?oldid=123176"
Community content is available under CC-BY-SA unless otherwise noted.