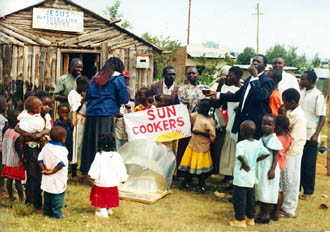 In April of 2010, Camily contacted Sharon Cousins, of Solar Cookers International, asking for advice on engaging young people in solar cooking, because he had read about some of her work with young students in the Solar Cooker Review. The result of this ongoing email exchange between a man from Eldoret, Kenya, and a woman from Viola, Idaho, USA, is the first pilot project for the Eldoret Student Solar Cooking Science Projects.

A group of students, ages 10 - 18, working with Mr. Wedende as advisor, took a scientific approach to solar cooking, studying a number of designs and then helping with construction and comparative testing of three different types of solar cookers that can be made from locally available materials. This project is designed to help the students take a creative approach at the outset, then refine and analyze the results using careful observation and methodical and critical thinking skills.

Students compared a CooKit, a bowl/basin type cooker with a low back reflector, and a new panel cooker design they came up with themselves that was partly inspired by Ms. Cousins's EZ-3 Solar Cooker. The new cooker does not yet have a name of its own, but it tested the strongest in their comparative experiments, though all three had the power to cook food or pasteurize water. Students have been enthusiastic participants in this pilot project, and have worked hard to come up with ideas, run experiments, and add to the database of information about solar cooking. Twenty students would very much like to make the new cooker design to take home, where the cookers can help their whole families. Ms. Cousins is trying to raise the modest fund for materials that will make this possible, as a reward for the time the students are putting into solar cooking research and development. Students will each receive a notebook and pen along with their cookers and pots, to keep records of how the cookers perform at home, and Mr. Wedende will do follow-up to encourage their progress.

So far, this pilot project has been a huge success. The students are engaged and excited about the ways solar cooking can improve their families' lives. They are learning skills that include creative problem solving, innovation, research, scientific methodology and observation, analytical thinking, construction techniques, and more. They have all learned three different ways to cook food with sun power. The fact that they have also come up with their own unique design that outperforms others is a bonus.

If this small pilot project continues to be so successful, Mr. Wedende and Ms. Cousins hope that a grant or award can be found that might enable Mr. Wedende to do more of these scientific approach student projects in the Eldoret area. Ms. Cousins thinks that many features in this project could be a model for empowering and productive student projects all over the world, to engage more young people in being a part of this sunny solution.

Camily and his wife Gaudenziah were trained in solar cooking by Peace Corps volunteer Barbara Rose, who herself was trained by Solar Cookers International.

Sun Cookers International runs a shop in Eldoret that sells the following supplies: 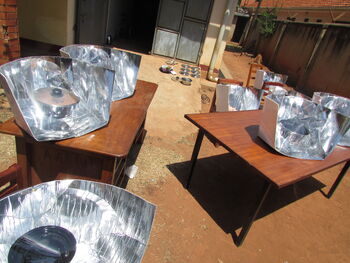 Retrieved from "https://solarcooking.fandom.com/wiki/Sun_Cookers_International?oldid=108538"
Community content is available under CC-BY-SA unless otherwise noted.