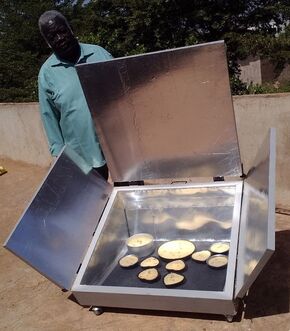 Gnibouwa Diassana of Bla, Mali won a "2006 Ashden Award for Sustainable Energy" worth 2,500 pounds sterling. The funds will enable his project Sun for All to increase production of cookers and to reach out to more women's groups and other community organizations. Diassana continues training people to use solar cookers. He has built a variety of solar cookers, plus a solar food dryer and solar water heater. Most of the solar cookers he has built are of the box type with three reflectors, based on a design by the Swiss organization ULOG. He has found homes for most of the cookers with organizations of artisans, nonprofits, women's groups and individual families. He reports that the cookers have been adapted for Mali and can be constructed with locally available materials and tools, even in remote areas. Mr. Diassana currently works for World Vision Mali.

To facilitate getting cookers into the hands of people who need them, Diassana has sold cookers at half price or on credit. He has been able to follow up directly with most of the users and observes that they are using less conventional fuel. He estimates that about 950 people have directly benefited from his cookers, while 10,000 more have witnessed solar cooking at his exhibitions and demonstrations. Radio and television coverage has spread the word further. Diassana reports that the effects of deforestation have become increasingly visible near Bla in the past few years, and that his work with solar cooking is meant to address this problem while also helping women save money and time and reduce their exposure to smoke.

His project has received some outside support, but his personal donations have sometimes exceeded 40% of the project's budget. He credits Roger Bernard of France and Angela Calvo of Italy as his main solar cooking influences. With his new funds from England to promote Swiss-designed cookers, Diassana illustrates the international connectivity in solar cooking.

Gnibouwa Diassana is now deceased, his enthusiasm for solar cooking is missed.

Mr. Gnibouwa Diassana has been able to find sources for all the materials for the CooKit solar panel cooker in or near Bla. “Cardboard is available in big towns,” he writes. “Plywood, glass, aluminum foil, sheet metal and plastic bags are available in Bla and neighboring towns.”

Mr. Diassana also applies creative thinking to obtain low-cost materials. He notes that tea, a very popular beverage in Mali, is shipped from China in boxes lined with aluminum foil which can be recovered and reused for making reflectors for solar cookers. “It works well,” he says.

Retrieved from "https://solarcooking.fandom.com/wiki/Sun_for_All?oldid=119797"
Community content is available under CC-BY-SA unless otherwise noted.