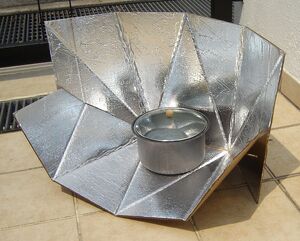 In early 2008, Teong Tan set a goal to create a functional solar cooker, from a flat sheet of cardboard, by using 25% less material than that required for a CooKit solar cooker. The end result, after about eight month's time, is the Sunny Cooker.

The Sunny Cooker, made from a 91 cm x 91 cm (36 in x 36 in) sheet of cardboard, has multiple triangular shape reflector panels to help focus sunlight towards a cooking pot. It is designed in such a way that its contour can be easily re-shaped, simply by tilting the cooker forward or backward. Altering the contour of the cooker would enable the cooker to become more efficient in capturing the sunlight at different sun angles.

To construct a Sunny Cooker, this will require a square sheet of corrugated cardboard measuring 91 cm x 91 cm (36 in x 36 in), aluminum foil and glue. The following are the construction steps for the Sunny Cooker: 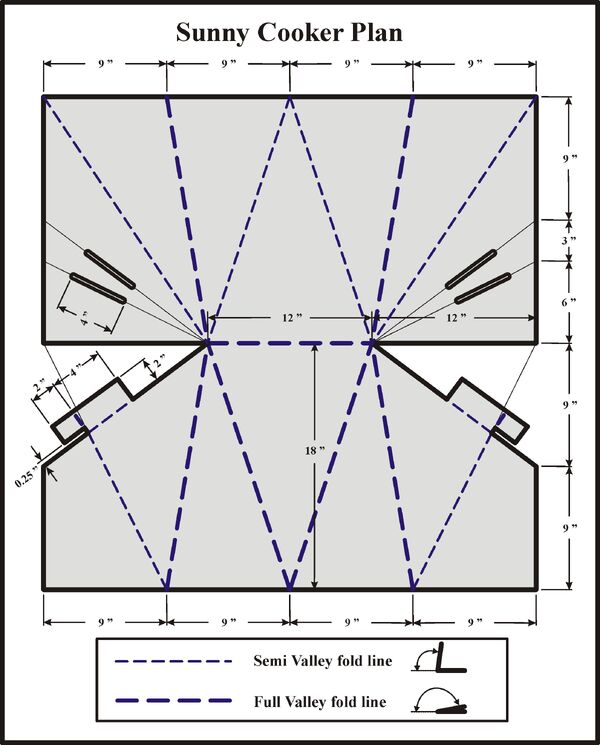 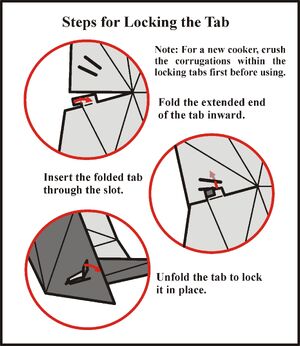 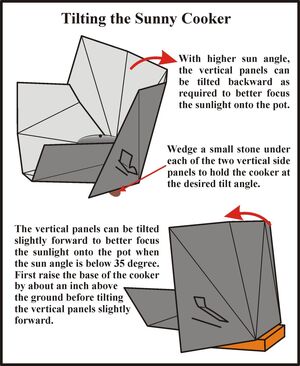 The vertical section of the cooker's panels can be tilted backward, and kept in the desired position, by wedging a small stone under the lower edge of the two vertical panels on the side. Backward tilting of the cooker will allow for better focusing of the sunlight towards the cooking pot when the sun moves to a higher altitude.

To cook, put food in a black metal pot (3 to 4 liters, or 12-17 cups, size), and cover the pot with a clear glass lid. Enclose the pot inside a clear oven bag, if available, and place the cooking pot on top of the cooker’s base. Set the cooker according to the instructions in the two previous paragraphs, and face the cooker directly towards the Sun to start cooking. Adjust the cooker, from time to time, to ensure that the sunlight stays focused on the cooking pot. Tilt the cooker forward, as shown in the above illustration, should there be a need to start cooking even when the sun is still low, less than 35°. It would also help if the cooking pot is raised higher by an inch or two, with a support, to better capture the low sunlight. 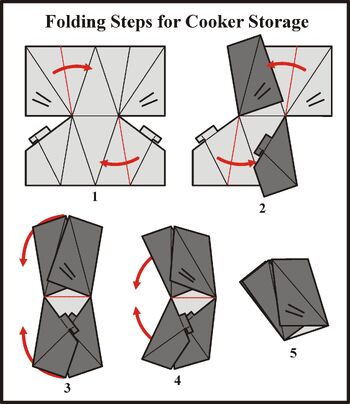 The Sunny Cooker can be fully folded by first releasing the two locking tabs from their slots, and following the folding steps shown in the illustrations below. A fully folded Sunny Cooker measures about 53 cm x 46 cm x 8 cm (21 in x 18 in x 3 in). Some of the joints, between panels, may remain flat when a folded cooker is taken out of storage and re-assembled for use. To correct this, it is necessary to refold the cooker, along its existing fold lines, and adjust the panels until you get an even cooker curvature. I hope that the introduction of the Sunny Cooker design will be able to help bring about meaningful savings due to a reduction in the amount of construction material required.